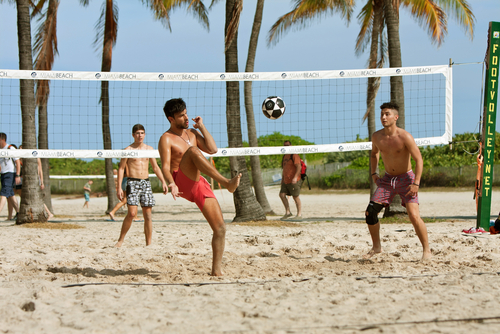 Imagine a scenario where you’re playing volleyball, and an opponent sends the ball hurtling toward your side of the court. You have a split second before the ball drops, and you can’t get low in time to stop it with your hands. But there’s one body part that’s close enough: your foot. Using your foot may seem like the only option, but can you kick the ball in volleyball?

Yes, it is legal for a volleyball player to kick the ball. Volleyball rules allow players to hit the ball with any part of their body, including the head, feet, chest, and hip. Kicking the ball will count as a touch and, except for service execution, is subject to the same rules as hitting the ball with your hands.

This post will explore the legalities of kicking the ball in volleyball. You can find specific details according to the following content:

Contents show
1 Volleyball Kicking Rules
1.1 The Rulebook
1.1.1 Double Hit Rule
1.1.2 Service Rule
1.2 Lower Volleyball Levels
1.2.1 To Preserve the Ball
1.2.2 To Protect Players
1.2.3 To Prevent Bad Habits
1.3 Beach Volleyball
2 When You Should Kick the Ball
2.1 Defending an Attack Ball
2.2 Chasing a Ball Out of Bounds
2.3 Reaching Under the Net
3 Why Kicking the Ball is Frowned Upon
3.1 Hands Offer Better Control
3.2 Kicking Sends the Ball Too Far
3.3 Bad Habit
4 Frequently Asked Questions
4.1 What is Kick Volleyball?
4.2 When did Kicking become legal in volleyball?
4.3 Is a kick serve legal in volleyball?
5 Final Thoughts on Can You Kick the Ball in Volleyball:
6 Related Posts: 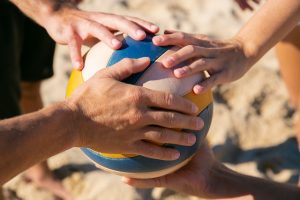 We’ll start by covering every known volleyball rule related to using your feet during a game.

According to section 9.2.1 of the 2021-2024 FIVB rules, “the ball may touch any part of the body.” This statement was in direct relation to what counts as legal contact in professional volleyball.

In the past, players were restricted to playing the ball with body parts above the waist. The sport was more rigid and less exciting back then.

However, with the limitless flexibility the modern rules have put in place, we have seen a number of stunning plays where athletes use their legs in crucial situations.

Don’t take our word for it. Watch this short foot-save compilation video and see for yourself!

There seems to be nothing stopping volleyball players from kicking the ball as much as they want except for the rules below.

Since the official rules state that you can hit the ball with any body part, using your foot is no different from using your hand in the eyes of the referee.

That means kicking is under the general restrictions that prevent the double hit fault. So, when you kick the ball, you’re not allowed to touch it with any part of the body again immediately.

If you receive an attack ball with your leg, your teammates can play the ball after you, but only two more times. That’s because of the general rule preventing a team from touching the ball more than three times without sending it over the net (the kick counts as one touch).

One might think that since kicking the ball is legal; then players can serve with their feet. That notion is false. You cannot kick the ball during service execution.

You can confirm this by checking section 12.4.1 of the 2021-2024 FIVB rules. It states that a player can only execute a legal service when they hit the ball with “one hand or any part of the arm.”

The foot is no hand, and neither is it part of the arm. Hence, serving with any part of your leg is illegal in volleyball.

Most low-level volleyball rules, such as in middle or high school, don’t allow players to kick the ball. In such cases, using your leg becomes illegal, no matter the circumstances.

This begs the question, why is kicking the ball allowed in pro volleyball but not in lower levels?

There are several reasons for the difference, and we’ll explore them next.

To Preserve the Ball

Volleyball is not football. The needs of both games are different; hence their balls are designed differently.

Although the best volleyballs can withstand being hit with the arms and slamming against the hard court, they are not designed to endure constant kicking. Even if the ball doesn’t burst, it could contort, thereby affecting its bounce and spin.

One of the key reasons players in low-level sports are unprepared for the big leagues is their reaction times are not as good as the pros. So, when two teammates go after the ball, and one of them throws out a leg to kick it, there’s a good chance none of them will react fast enough to pull back.

Getting a kick in the head from a teammate could give any player a concussion. There’s also the chance of playing the ball against sensitive body parts.

For this reason, lower levels of volleyball ban ball kicking.

Kicking is not the optimal way to receive the ball. Hence, beginners should not make it a habit. Rather, they should focus on improving relevant skills in the volleyball game, such as digging, diving, blocking, and passing.

Lower league players may someday make it to the biggest stages, so coaches want to ensure their players don’t become reliant on kicking the ball with their legs when there are many more efficient options.

Are the rules on ball-kicking different in beach soccer? The right answer is no. Players are allowed to kick the ball in beach volleyball.

Since it’s a legal contact in all forms of the professional sport, should you be kicking the ball every time you get the chance? After all, it keeps you from diving and leaves you ready to make your next move almost immediately.

The short answer is no. Kicking is a poor strategy. However, there are times when it makes sense to use your feet.

When You Should Kick the Ball 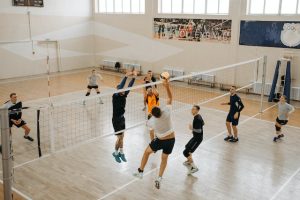 The following are scenarios where ball kicking is most effective.

Spectacular foot saves are certainly the highlights of being able to kick the ball in volleyball. When the opponent plays an attack ball such as a spike or lob, and for some reason, you can’t dive low enough to stop it from landing on your court, kicking the ball is your only option.

However, proper defensive positioning and fast reaction should keep you from getting into such sticky situations and allow you to defend the attack properly.

Chasing a Ball Out of Bounds

This is also another common use of the volleyball kick. A ball heading out of bounds will be difficult to chase down, especially if there are obstacles ahead, and diving will be too risky. When that happens, your best bet may be to go for the ball leg-first.

This move, when done properly, will allow you to lob the ball back into the main court for your teammates to receive.

Reaching Under the Net

Volleyball rules allow players to reach under the net so long as their foot doesn’t completely cross over the center line to the opponent’s side of the court.

That means that it’s legal to cross the center line with your foot into the free zone. The use of this loophole is highly situational, but it can get you out of an impossible situation.

A good example is when your teammate accidentally plays the ball over the side and center lines. If the ball is close enough, you can stick a foot under the net and lob the ball back over the net and into your side of the court for your teammates to attack. It may seem like a desperate kick, but there’s a chance the move will catch the other team off-guard.

Why Kicking the Ball is Frowned Upon 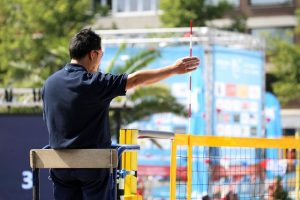 Despite the undeniable ball-kicking use cases listed above, many coaches and even referees don’t approve of it.

There are many valid reasons for their disapproval. Check them out:

It’s much easier to control the ball with your hands than your feet. Setting is a vital part of the sport, and it requires optimal control that the legs don’t offer.

Hence, when you get the chance, your first option should be to use your hands, especially if you play the setter role.

The same goes for receiving the ball. Getting more control of the ball will keep you from sending it out of bounds.

Kicking Sends the Ball Too Far

A kick is potentially more powerful than a hand hit. Hence, you run the risk of sending the ball into the rafters or the crowd when you kick it.

Many coaches find this annoying because it takes time to retrieve the ball – time that would have been better spent practicing.

Players fine-tune their skills by forming habits using repetition. The more you dive to receive low balls, the better you will get at doing just that.

However, when you approach some of those situations by kicking the ball, you’re forming a bad habit and denying yourself valuable experience.

It’s even worse if you practice kicking the ball when you can perfect your other skills.

What is Kick Volleyball?

Also known as sepak takraw, kick volleyball is a sport. Players in kick volleyball can only hit the ball with their legs, chest, feet, shoulders, and head. It is similar to traditional volleyball and involves 2-4 players per team.

When did Kicking become legal in volleyball?

Reports reveal that kicking the ball became legal after a rule review in 1993. Prior to that, players were banned from using any body part below the waistline.

Is a kick serve legal in volleyball?

No, it is illegal to kick a service in volleyball. You can only use one hand.

Final Thoughts on Can You Kick the Ball in Volleyball:

So, it’s settled. You know not to kick the ball if you can avoid it. Only rare situations make it okay. However, the key takeaway is that the referee will not penalize you for kicking the ball so long as it’s not to execute a service.

If you are concerned about diving because you fear it could hurt your knee, you can get yourself a reliable volleyball kneepad. It will allow you to defend attack balls more confidently and not have to rely on kicking.