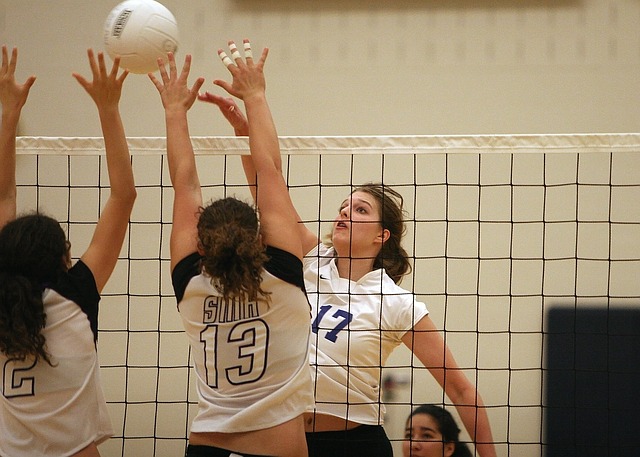 Until a few years ago, volleyball rules about the net touch were the most confusing aspects of the game. With the rule change in 2017, things have become a little clearer. So, can you touch the net in volleyball? The answer isn’t as straightforward as you might like, but we have provided the short version.

Contents show
1 Can You Touch the Net in Volleyball?
2 What Happens if You Touch the Net in Volleyball?
3 Everything You Need to Know About Net Touch
3.1 Net Touch or Net Contact Violation
3.2 Scenarios for Legal Net Touch
3.2.1 Pre-Setting
3.2.2 Post-Setting
3.2.3 Spiked Ball
3.3 Scenarios for Illegal Net Touch
3.3.1 Net Pull
3.3.2 Leaning on the Net
3.3.3 Net Pushing
3.3.4 Touching the Top Tape
3.4 Rule Change
4 How to Avoid Net Contact
4.1 Prepare Your Mindset
4.2 Beware of the Landing
4.3 Practice
5 Other Forms of Net Violation
5.1 Touching the Ball on the Opponent’s Side
5.2 Ball Under the Net
5.3 Player Under the Net
5.4 Back Row Player Attacking the Ball Above the Net
6 Summary and Conclusion
7 Related Posts:

Can You Touch the Net in Volleyball?

A volleyball player is not allowed to touch the net if the action interferes with play or gives their team an advantage over the opponents. The referee has the task of determining the intent and implications of a player touching the net. Also, players are prohibited from leaning on or grabbing the net for support.

This article will reveal all the key details about net touch and violations in the following order:

What Happens if You Touch the Net in Volleyball?

If a player touches the net with any part of the body, one of three things will happen. Either the referee calls it a foul, allows play to continue, or declares the ball dead and calls for a replay. All of these outcomes depend on the circumstances surrounding the net touch.

It’s a foul if the referee determines that:

Play continues if the referee determines that:

It’s a dead ball if the referee determines that:

You can see that the rules on touching the net in volleyball are still subject to interpretation, and a lot of the calls rely heavily on the referees. However, they used to be a lot more confusing. We’ll talk about that in the next section.

Everything You Need to Know About Net Touch 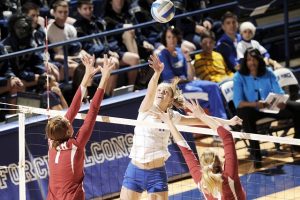 This section will take a deeper dive into net contact, what constitutes a foul, and what doesn’t. We’ll also look at when and why these rules were set in place.

This is a volleyball violation that happens when a player touches the net with any part of their body in an attempt to play the ball or if the player gains an advantage by touching the net. It doesn’t matter whether or not you touched the ball; all that matters is the attempt. Intent plays a large role in the referee’s decision, but so does implication.

Also, indoor volleyball and beach volleyball league associations tend to follow the International Volleyball Federation (FIVB) regulations with slight variations based on their locations. However, the majority of the volleyball world is unified in most of the net touch rules.

When a net fault is called on a player, the opposing team scores a point. Although according to FIVB rules, the best team out of five sets wins, giving the opponents free points from net touch fouls in a game could be the difference between a win and a loss. That’s why all hitters in a team must be able to strike the ball over the net without touching it, even under pressure.

With all of the above rules, one might wonder if it’s possible to touch the net during active play and NOT get called for a foul. There are many scenarios that could allow this, but we’ll be looking at three of the most common.

In this case, the ball is about to land in an area that’s close to the net. In your attempt to set the ball, part of your body brushes the net. This contact will likely be considered legal if your net touch doesn’t affect play or give you a clear advantage. It also helps if the point of contact is at the bottom of the net.

Quite similar to the first, this scene occurs close to the net. If you set the ball and then brush the net on the follow-through, there’s a good chance you’ll get away without a net violation.

The referee can’t call a foul on you if the opponent spikes and the ball contacts the net with enough force to cause you to touch the net and the ball simultaneously. This is completely accidental, and there’s little you can do to avoid it.

The opposing teams might react by complaining about the no-call from these cases and other similar cases. Thankfully, referees are trained and even instructed to expect such reactions. You just have to trust them to make the right decision.

Some cases of net contact are clear violations, and you’ll almost always get slapped with a foul for them. Below are the most common ones. You should actively try to avoid them all game.

If you pull on the net in an attempt to spike the ball, the referee will call a foul.

If you made a play but relied on the net for support by leaning on it, you have gained a clear advantage, which constitutes a net violation.

Using your hands or any other body part to push the net when an opponent is trying to make a play, on the other hand, is a foul, no matter your intent.

When you try to hit or block the ball close to the net, touching the top tape is an automatic foul in most volleyball leagues, especially the USAV.

Before 2017, the FIVB interpreted a net touch violation when contact with the net interfered with play.  Players could touch any part of the net but the white band. This rule caused a lot of controversy as only the referee could determine whether the player at fault interfered with the play or not.

In the FIVB’s 2017 rulebook, this interpretation was changed to recognize a foul as net contact when there was an action to play the ball.

This means that the hitter or the teammates around them can be charged with a net violation if they try to make a play by touching any part of the net.

The rule change has led to substantially fewer controversies in the indoor game and beach game. 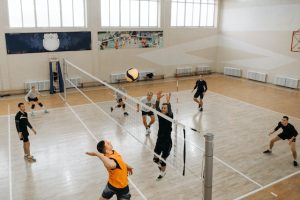 As we said, a net touch violation will give the opposing team a vital point. You want to avoid dishing out these freebies, especially if your league rules don’t allow matches to exceed the third game. It’s best to force them to rely solely on rally scoring.

Before and during a game, you should make up your mind to see the net as an untouchable wall. Pick whatever image fills you with the most dread. It could be an electric fence to a burning wall. Whatever will tell your subconscious to pull you away when you get too close will help.

Beware of the Landing

The follow-through after hitting the ball provides the greatest risk of net contact. Spikers have to remember to land away from the net each time they hit the ball. If you’re worried about getting injured, you should get a reliable volleyball knee pad for better protection.

Because spiking involves a lot of momentum, avoiding the net may be easier said than done, which brings us to the next tip.

It would be best if you took extra time to practice your positioning and awareness when blocking or hitting the ball in the front or attack zone. Learn to allow enough space for arm movements and landing.

Other Forms of Net Violation

Net touch is not the only net rule violation you should be wary of. There are several others, including the following:

Touching the Ball on the Opponent’s Side

You violate volleyball rules if you reach over the net to hit the ball on the opponent’s side. The only exception is if the ball touches the other team three times prior to your attempt or if none of them is close enough to reach it. You may also get away with it if the only player in range of the ball risks a double hit.

Ball Under the Net

If your team plays the ball over the center line and under the net, the opposing team will be awarded a point.

Player Under the Net

Your foot isn’t allowed to cross the center line into the opponent’s side completely. You can make plays by only placing part of your foot over the line.

Back Row Player Attacking the Ball Above the Net

Back-row players are prohibited from jumping anywhere in the front zone to attack a ball higher than the net. They can do this only if they jump from behind the attack line, which is quite difficult for back-line players to pull off.

The general rule of thumb when playing volleyball is to avoid any form of contact with the net when play is active. Seeing that most blocks and spikes in volleyball occur close to the net, players tasked with them have to keep practicing their positioning and follow-through.