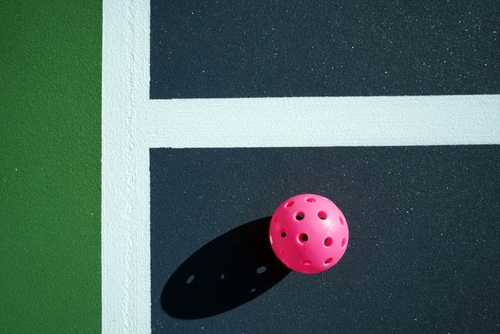 Pickleball is a fun and fast game. It is not only the perfect sport for exercise but also a game that unites friends. Pickleball is easy to learn but, like all games, has penalties for faults. This leads us to ask, “What is a fault in pickleball?”

Pickleball combines several elements of ping-pong, badminton and tennis elements. It is suitable for all ages and can be adapted for people with paraplegia. The game gets even better when you understand pickleball rules and avoid faults.

This article will discuss faults in pickleball and teaches you how to avoid penalties in a game. This promises to improve your gaming experience as you become a professional pickler.

Contents show
1 What is a Fault in Pickleball
2 Common Faults in Pickle Ball
2.1 1. Serving and receiving without having the ball first bounce
2.2 2. NVZ entry during a volley
2.3 3. Causing the ball to be sent out of bounds
2.4 4. Making a shot at the nets
2.5 5. Causing the ball to strike a stationary object before it bounces
3 Other Pickleball Faults
3.1 1. Foot Faults
3.2 2. Wrong Serves
3.3 3. Wrong Team Member Serving
4 Summary
5 Frequently Asked Questions
5.1 What are faults and dead balls in pickleball?
5.2 What happens if you hit a Pickleball into the net?
5.3 What is a fault in volleyball?
5.4 What is no volleying in pickleball?
6 Conclusion
7 Related Posts:

What is a Fault in Pickleball 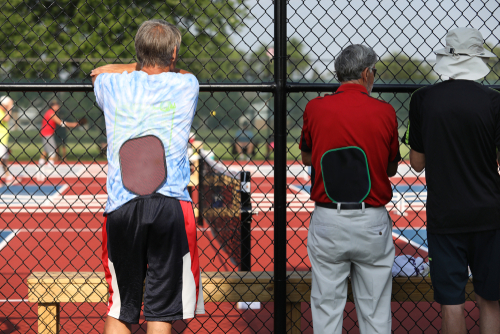 A fault in pickleball is when a player makes a mistake during a game. It might be a dead ball or foot fault. It is a fault if it causes a suspension of the pickleball game.

The basic rules of faults in pickleball are:

General knowledge of pickleball’s common faults will help you play better games. It also makes you a fun partner and a stronger opponent. 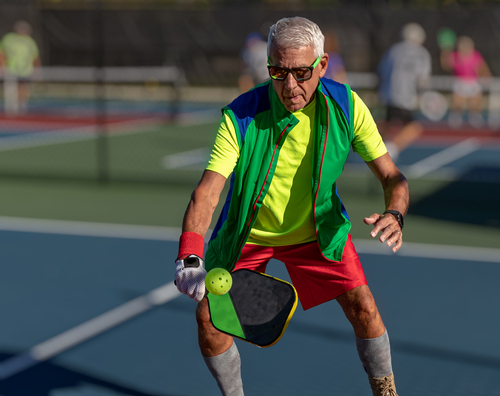 There are many different kinds of errors, but five, in particular, are well known. There are 14 fault regulations in the rulebook that the USAPA developed (from 7. A to 7. N).

The USAPA upgrades these flaws and rules yearly. This upholds the game’s integrity and strikes the ideal balance between fairness and pleasure. The five common errors include:

1. Serving and receiving without having the ball first bounce

The pickleball game starts with a team serving the ball to bounce at the other side of the net.

The rule of the game is that the ball must bounce on the opposite side before hitting the paddle. When returning the ball, the receiving player must apply the same rules.

If any team fail to apply this rule, they will have committed a fault. Every fault has a set penalty.

2. NVZ entry during a volley

When volleying or about to return the serve, a player cannot enter the kitchen area or the non-volley zone. Also, the player must not make the error of entering the NVZ just after striking the volley.

3. Causing the ball to be sent out of bounds

The ball must remain on the court’s playing field. You are making a fault if the ball crosses the goal line or goes outside the boundaries.

The tennis game has a similar guideline. Here, a fault usually results when the ball crosses the line, ending the rally.

Players who practice quick shots often commit this fault when they want to smash the ball harder.

4. Making a shot at the nets

If you serve or return the shot too quickly, the ball may hit the nets and land in the player’s NVZ. This type of service is a fault in a pickleball game. But if the ball managed to contact the net and travel to the other side, it would fall under “let service.”

In the event of let service, the match continues. The fault will apply if any player halts the game while calling the “let service.”

The “let rule amendment in 2021” considers a ball crossing the Non-Volley Zone a fair shot without a fault even after touching the nets. This gives grace to the players and allows fortuitous errors to pass.

5. Causing the ball to strike a stationary object before it bounces

It is a fault if the ball strikes a stationary object on the court before bouncing. These objects include a fence, net post, bench, or a person. The International Federation of Pickleball 2021 Rulebook’s Rule 7J states that:

“A ball in play contacting any permanent object before bouncing on the court.” 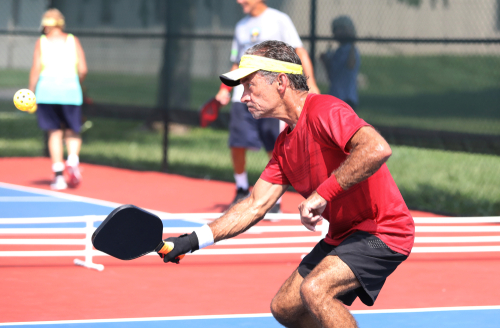 The five faults above are the fundamental faults in pickleball, but the faults are an endless list. So, we will discuss the frequently seen faults in a pickleball court.

There are two ways you could make a foot fault in a pickleball match. You cross the service line when serving or cross the no-volley line while hitting a volley (into the no-volley zone or the kitchen).

Owing to the speed of the next shot, it is still a fault if you cross the line after firing the volley.

A rule of pickleball is that the player must make an underhand serve. Another rule states, “Paddle contact with the ball must be below the server’s waist (navel level)”.

Both of these rules essentially explain how to serve in pickleball. Any player who violates these guidelines will have a “fault” recorded against them on the scoresheet for the game.

You will have a penalty if you serve the ball just above your waist height or your paddles touch court ends. This is one of the “toughest to overcome” pickleball flaws in the game.

Note that the incorrect service failure only affects active pickleball. You can serve incorrectly in a dead pickleball match where the referee has not announced scores.

The most frequent mistake in a double play is the wrong partner serving. However, in pickleball, stacking is acceptable and legal.

The right side is always the serving side if there are no faults.

Constant practice can help to reduce your potential for making faults in a pickleball game. But learning about the game can also help you to gain expertise.

Before playing your first game, familiarize yourself with all the fundamental pickleball words and rules. You’re far less likely to make many mistakes if you have researched the game beforehand.

When you play with a more seasoned teammate, they might not anticipate your preparedness. This gives you an advantage over them.

In the end, practice is the key to avoiding mistakes. You cannot avoid all errors, but your errors will be minimal after enough practice on the pickleball errors.

What are faults and dead balls in pickleball?

Have you ever used the terms “dead ball” or “fault” when playing pickleball? As a pickler, you should be able to describe a fault or dead ball in a pickleball game. Furthermore, knowing a game’s fault and dead balls is crucial.

This pickleball rules article has detailed information on faults and dead balls. What is a fault? A fault occurs when a player breaks one pickleball rule.

What happens if you hit a Pickleball into the net?

The opposing player would not have made a mistake if they touched the pickleball net as soon as it hit the ground. This is because they did so after the dead ball from the fault of striking the pickleball into the net.

What is a fault in volleyball?

A fault in volleyball is any action that halts the game due to a rule infraction. It is a fault if the server strikes the ball without a bounce after the serve or service return (Two-Bounce Rule). Making a return or service that involves hitting the ball into the net is also a fault.

What is no volleying in pickleball?

One of the top five pickleball mistakes is to volley in the kitchen—the kitchen in the non-volley zone in a pickleball game.

When players volley (hit a ball in the air) while standing in the non-volley zone, they commit this fault. This area is a rectangle measuring 7′ by 20′ on each side of the net. You are not permitted to cross the ‘no volleying line’ to serve or volley a shot.

Regardless of how talented you are at your game, even a minor error can make a game into a nightmare for you. You must be able to answer the question, “what is a fault in pickleball?” to enjoy the game.

Since you are now aware of the potential errors and their consequences in pickleball, we think you should adjust and play by the rules. It will make your pickleball games more enjoyable.