Does a Block Count as a Hit in Volleyball? Volleyball rules can be easily misunderstood, especially when it comes to hits. One of the most widely known volleyball rules is that your team is only allowed three hits to get the ball over the top of the net and into the playing court of the other team. So a frequently asked question is whether the block counts as one of the three hits. Well, the short answer is that whether it’s beach volleyball or indoor volleyball, blocks do not count as team hits.

You can see how it could easily confuse, especially for people playing volleyball for the first time. Continue reading to understand the various aspects of blocking and how and when it can count as a hit.

What Is a Block?

Blocking is a defensive skill in which the player on one team deflects the ball sent by the opposing player on the other. The goal is to prevent a successful attack and a point for the other team. The blocker’s job is to redirect the spiked ball to the opposing team’s side of the court. The block is the first hit your team will get against your opponent’s serve (which is the attack), making you the defensive player.

How Does Blocking Work? 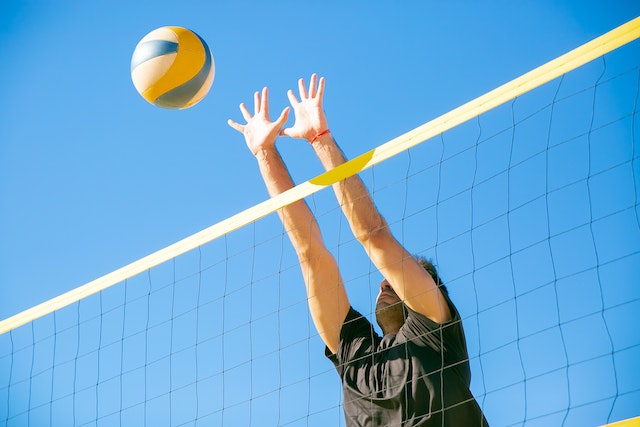 Each team has three front-row players who block the ball in this situation. If they can’t stop the opponent’s serve, it falls to the three back-row players to set it up so the ball can be returned. Especially in beach volleyball, there is a rule that grants each team three hits to get the ball over the net and over to the opposing team.

The first and second touches are primarily for positioning the ball within a team’s playing area, while the third hit is intended to hit the ball into the court of the opposing team. The rules are slightly different for beach volleyball, as each opposing team has a total of four hits.

Generally, the first hit of the ball after a block may be executed by any of the team players in the game. A block is judged complete when all attacking players on a team have touched or passed the ball and no defender stands between them and the opponent’s goal, or any defender has engaged an opponent who had the ball before being blocked.

Back-row players cannot come to the front row on a block attempt, as per one of the game’s different rules of the game; Another rule is that the player should have a part of their body above the net’s height before making contact with the ball. We will discuss these and others later on.

Does a Block Count as a Team Hit in a Volleyball Game?

Blocks do not count as hits in volleyball, and that’s for several reasons. One of the primary reasons a block does not count as a team hit is that blocks are the defending team’s first contact with the ball and are defensive plays.

Another reason a block does not count as a hit is a rule we just mentioned before: the player’s body must be above the height of the net while making contact with the ball. This can be challenging, especially if the player is short. The player cannot block the ball if they cannot get above the net. However, there is at least one type of block that does count as a hit in volleyball.

When Does a Block Count as a Hit in Volleyball?

A soft block qualifies as a hit in volleyball. The soft block is when a player touches the ball without getting above the height of the net. It would count as a regular contact in this situation, just like a pass, dig, or volley and the team would just need two more touches to move it to the opposite side.

What Is an Illegal Block In Volleyball?

Only front-row players are allowed to block, which is a crucial rule in blocking. Back-row players frequently move during play and will go in front of the attack line, but as we’ve already seen, players are only permitted to touch the ball over the height of the net if they are behind the attack line. Not obeying this rule is commonly known as a “back row attack infraction.”

Another blocking rule is that you cannot go beyond the vertical plane of the net and interfere with your opponent’s ability to strike. Now, if you watch professional volleyball, you’ll see that this rule is broken in practically every rally. However, you are permitted to pierce the net, just so long as you don’t interfere with your opponent’s play or block the ball before he has the chance to attack with it. You can perform a legal block if you don’t violate any of these rules.

Is There a Limit to the Number of Blockers When Playing Volleyball?

A block is officially counted only when the ball makes contact with a blocker; however, in some circumstances, the ball will deflect or bounce and touch many blockers simultaneously. Several teammates may make consecutive touches as long as they are done within the same action.

Generally, teammates may make a joint block attempt by forming a wall for a stronger defense. Because only front-row players can block, the maximum number of blockers you can have at once is three (at least. for indoor volleyball).

How Does the Referee Signal an Illegal Block?

Is There A Point Awarded For a Block In Volleyball? 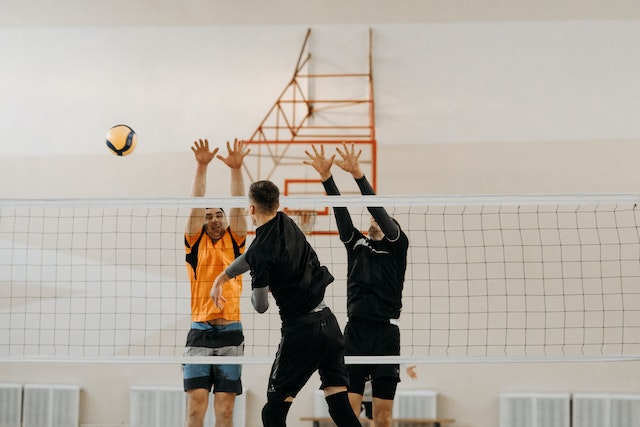 Even though a block does not count as a hit in a volleyball match, a team can score points for it. If the middle blockers succeed on a block attempt of the attacking ball and the rally is completed, the blocking team will score three points. A block may be executed by hitting the ball over the top of the net and toward the opposing team court, and a blocking team can score 2 points by doing this.

If the middle-blockers “grab” the ball and it stays in play on their side of the volleyball court, the team can score one point. The game continues until the ball falls on the court.

Indoor Volleyball and Beach Volleyball — How Do The Blocking Rules Compare?

While comparable to indoor volleyball, beach volleyball has some distinct rules that affect how the game is played, as we’ve established before. The prohibited methods of interfering with the opponent’s play also apply here because the regulations grant the right to ball contact thrice only. The same rules for the role of back row players, the team hits, and soft block play also apply.

For example, in beach volleyball, opponents hit the ball with their palms and are not allowed to ‘tip’ the ball over the top of the net. Also, players have three hits on the ball after a block.

Does a Block Count As a Touch in Beach Volleyball?

Does blocking the ball coming from an opponent’s serve count as a touch? Well, while a block does not count as a team hit in most scenarios, it does count as a touch. When you hit volleyball to block, you have touched it once and can’t touch it again till your teammate has.

This may seem unfair, especially since playing volleyball in a beach setting requires just two players (compared to indoor volleyball, which usually has six people playing on each team).

This rule makes sense for beach volleyball because a player who comes up to block and knows they may be able to touch it again may redirect it up to themself, jump, and slam it into the opposing team’s court. While this may appear to be unreasonable, keep in mind that, except for the highest levels of beach volleyball, attacks aren’t as forceful as in indoor volleyball.

As we have seen, whether in beach volleyball or indoor volleyball, the block is considered the first contact with the ball and isn’t technically considered among team hits. It’s understandable that these nuanced rules on how the game is played may appear slightly confusing initially.

But it will be well worth your time to learn them because it will not only help you comprehend the rules but help to define and refine your style of playing volleyball as you adjust to avoid breaking those rules, especially if you are a back-row player.