How Long Are High School Volleyball Games? Volleyball is a popular sport in high school. Almost all of the students like this game. They participate either in the game or in they like watching it. To enjoy the game as either participants or spectators, they must know its basics. This includes knowing how long a volleyball match lasts.

Knowing the time limit of volleyball matches in high school is relatively easy. To predict the length of a volleyball game, you must understand the rules that affect the time of a high schoovolleyball match. Volleyball tournaments often end outside the official time. This is because some events occur within the game, interrupting the time.

This article covers the period of a volleyball match’s playing time and its scoring system. The players in most sports have a set time to rack up as many points as possible. The volleyball match continues until the players score a specified number of issues.

How Long Is a Volleyball Game in High School

Yet, you may want a general idea of the duration of a middle school, junior high, senior high school, and college volleyball game as you or your wards go through these stages.

1.   How Long Is a Volleyball Game in Junior High School?

The junior high level and younger teams tend to play matches that are shorter in duration.

In the junior high volleyball game, players employ the “best of three” technique. The first team to win two out of three games is the winner.

While it may seem like this would make a match shorter than in longer formats, it is crucial to recall that the skill level is not quite as high as that of senior high school players.

As lower-level volleyball teams play to match the skill level of higher-level teams, rallies can go on longer.

The patterns might not be as fluid as at a higher level, and substitutions might take longer.

2.   How Long Is a Volleyball Game in Senior High School?

Senior high volleyball depicts the transition from an elementary level of volleyball play to a more complex game. Most high school volleyball teams use the “best of five” format. The winning team is the first team to win three out of five games. This could take up to five hours.

At this level, time-related variables emerge because teams might easily win a game. 3-0, or a drawn-out encounter could end with a score of 3-2.

Those two extra games can undoubtedly affect how long a match is in total. The first team to reach 25 points often wins high school, college, and competitive games.

The winning team must triumph by at least two points. For instance, a win would be 26 – 24, not 25 – 24 points. The volleyball teams often play for 15 points if the match necessitates continuous play as a tie breaker set. In the short game, the win-by-two rule still holds true.

3.   How Long Is a Volleyball Game in College?

The college and international levels of volleyball competition are clearly the highest.

Athletes at this level often excel in their positions and usually end rallies promptly.

Each game will certainly have a different result, although top volleyball is often the fastest.

Quick service is the norm. Substitution patterns need little time, and the players from the two groups know these patterns.

The scoring system and fifth-set format used in high school volleyball are still in effect at this level. 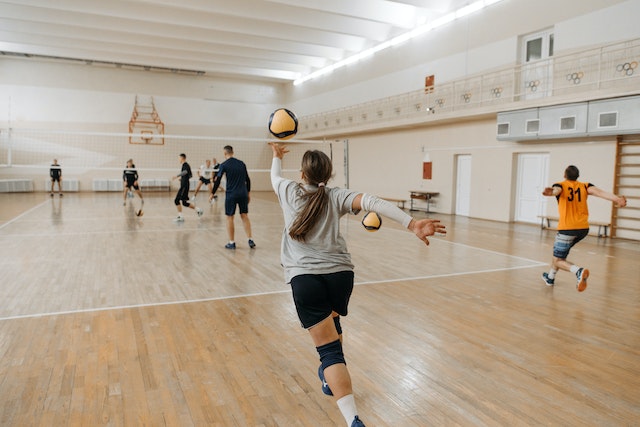 To be successful in the game, all players, coaches, and officials must know and understand the volleyball principles. Like college volleyball, high school level games are played with a rally system. This allows the opposing team to get the point if your team breaks a rule.

Rules cover everything from fundamental concepts to player substitutions. It is critical to have current details on the rules. This is because volleyball rules are constantly changing.

The fundamentals to know about volleyball include the following:

1. General Rules in a Volleyball Game

Each team has six players when playing competitive volleyball.

The 6 players in a volleyball set are divided into 3 in the front row and 3 in the rear row. The dividing line between the front rows from the rear is 3 meters (10 feet). Before playing the ball over the net, each team has a maximum of three touches.

A player twice in a row (except a block) should not touch the ball two times in a row. This implies that if a player maintains possession of the ball, they will not play a second touch without a teammate touching the ball first. But, if a player blocks the ball, this is not considered a team touch. Hence, the blocker is free to own serve of the ball.

There are a maximum of five sets in volleyball. Accordingly, a team could win three sets to zero, two sets to one, or even three sets to two. In most junior high schools a game of only two sets is often played.

In Senior high school, however, four sets to five sets are played. This is due to their skill levels and higher endurance.

Players play a volleyball set to 25 points, but the winning team must win by two points or more. Accordingly, if the score is 24-24, it becomes a continuous game until one team has won . The 5th set is the only one for which these score lines are used. In the fifth set, which serves as the tiebreaker the match is played to 15 points. The points needed to win determine the number of sets played.

In volleyball, the best-of-five-set format is used. The last set needs 15 points after the first four sets are played to 25 points each.

Two points for a team must win a set. Each set goes on until one of the teams takes a two-point lead because there is no ceiling. Matches are played in best-of-three sets using the rally point system in beach volleyball. The final set is played to 15 points after the first two sets are played to 21 points each. A team must once more prevail in a set.

Volleyball sets overhand ball contact that is made. This occurs after a team member has made a dig. Sets are typically the second contact in a rally. One team must score a specific number of points to win a set contested between two teams. For instance, the winning team in conventional volleyball must score 25 points.

It might come as a surprise to those who are wondering whether volleyball has a halftime that there is not much time in between sets. Especially between the second and third set.

A team only has a little window of time to reorganize after winning a set before the next one starts. 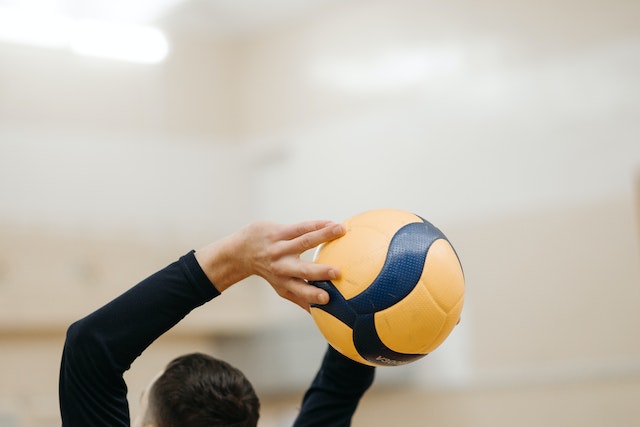 Moving around in the sand when playing beach volleyball is demanding enough, but best-of-five games with only teams of two are difficult and uncomfortable. As a result, beach sets are condensed and limited to only three sets to make them more entertaining to watch.

Timeouts lengthen volleyball. Here, the coach has the play suspended. This is also the official game pause, which takes place due to a serious but specific problem. In a play, only the team captain and coach have the authority to call a timeout. In professional and competitive games, it is typical. The captain requests a timeout in every set when the players become too fatigued. The coach can request two timeouts in a game.

The length of a volleyball game depends on a variety of factors that occur during a game. This includes the skill level of players.

Each play becomes more intense and aggressive as the players’ skillset increase. More volleyball tournaments will be played at a faster speed when the players are competent. However, even at the highest levels, evenly matched opponents might prolong a game because they will still gain points almost equally, lengthening a set.