Ever wondered how freestylers do it?

Here’s how you can learn the trick for yourself – no matter how much freestyle experience you have.

The act of kicking the ball into the air is absolutely crucial in making the around the world possible. Too low, and you won’t have enough time, too high and you’ll struggle to get your foot all the way around the ball.

Apart from getting the right height, you’ll also need to ensure that your kick up is almost completely vertical. If the ball goes too much to the side, you’ll struggle to control it after completing the around the world.

It’s worth actually going out and practicing your kick-ups to ensure they’re as good as they possibly can be. The better you are at juggling, the easier it will be to complete an around the world.

Once you’ve got a good kick-up, it might be tempting to immediately begin thinking about your foot movement. However, it’s important to make sure that your weighting and balance are on-point beforehand.

As your strong foot leaves the ground, you must be able to balance your weight on your weak foot to ensure you’re able to make your way all around the ball. If you’re off-balance, your movement will be much slower.

You don’t want to plant your weak foot too heavily – your weight should be on the ball of your foot to give yourself a little added agility.

Now you need to think about how you’re going to get your foot all the way around the ball in time.

The hardest part of doing this is actually ensuring you can keep control of the ball as you touch it again. At first, you’ll find yourself hitting it off to the side, which is often the result of moving your foot too fast. Your aim is to develop a controlled technique which gives you plenty of opportunity to get back under the ball in time.

To begin with, practice this initial movement, as shown in the GIF. Kick the ball up, and in the same motion, bring your foot up and to the side.

Once you’re able to do this, and still keep a good kick-up going (meaning, the ball goes completely vertical), you can begin to go all the way around the ball.

Don’t rush your movement. When first starting out, it’s perfectly normal to be late as you get used to the technique. At this stage, it’s more important to get the basic movement right, and ensure your kick-up is still nice and straight.

Keep your eye on the ball to ensure you don’t accidentally kick it. Also, as you begin to get above the ball, you can twist your ankle slightly to allow for slightly faster movement.

Getting all the way around the ball is just one step – now you’ve got to actually control the ball and continue juggling for the around the world to count!

Good preparation is key. As we mentioned earlier, you can’t be too late to get back around the ball, otherwise you’re likely to hit it on the side, rather than just underneath, resulting in the ball shooting off to the left or right.

You can also try kicking the ball a little higher to give yourself more time. But note that this will mean more distance your foot needs to travel.

If you’re getting there on time but still struggle to control the ball, ensure that your foot is in the right position. Give the ball a nice big area of space to land on the top of your foot – don’t tilt your ankle to either side.

Another issue people often face when trying to control the ball is losing their balance. If staying on the ball of your foot (as we just discussed) isn’t working for you, try to plant your foot a little more. Don’t go completely flat-footed though, as this will slow down your foot movement.

The around the world is actually a relatively simple trick – the hard part is learning to do it on your weak foot!

If you’re struggling, consider practicing your regular keep-ups a little more. You should be able to do at least 20-30 in a row without too much trouble before you move on to mastering the around the world.

Did you find the around the world too easy?

Football freestyle has much more to offer than just this simple trick. Next, try an inside around the world (moving your foot the opposite way around the ball), do the trick with your weak foot, or you could even try to master the Touzani around the world (shown below). 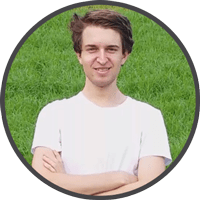