Pickleball is a racket sport that has been gaining popularity in recent years. Some people have even asked, “Is Pickleball easier than tennis?”

Understanding what each sport entails is essential to help answer this question. For example, Pickleball is played with a paddle and a Wiffle ball on a badminton-size court. Conversely, Tennis is played with a racket and a tennis ball on a tennis court (larger than the pickleball court).

So, is Pickleball easier than Tennis? The answer may depend on many factors, which we’ll cover in the following sections. So read on to learn more about these two popular racket sports to find out which is easier.

So Is Pickleball Easier than Tennis? 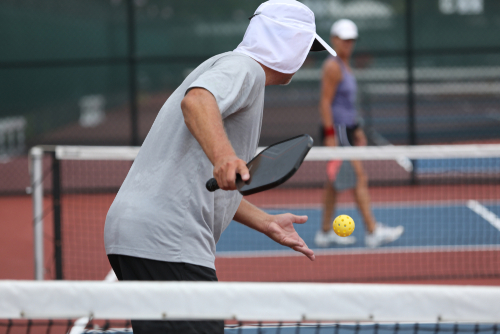 Let’s get directly to the question. First, despite their similarities, they are both different sports; therefore, the best approach to determine which is “easier” would be to consider the various features of each sport.

The regulations are the same as in Tennis, with a few exceptions.

The size of the court is one of its most outstanding features. The pickleball court needs to be 44 feet long and 20 feet wide to play doubles, compared to 78 feet for Tennis.

Like in Tennis, pickleball players must let their ball stay on the court to serve. When performing underhand, the point of contact must be below the hip.

You should also be aware that Pickleball uses a different scoring system. There isn’t a game set in it. To win, you must be ahead by two points when the other team reaches 11 points.

The game won’t be over until one team has two or more points and wins. In contrast to Tennis, Pickleball allows scoring while your team is serving.

One of the most challenging rules for newcomers is that before volleying, the team must allow the ball to bounce once on each team’s side.

Below are a few criteria to use if you want to judge which sport is easier, Tennis or Pickleball.

Pickleball may be easier than other sports in terms of movement because it requires less movement. Nevertheless, whether you are playing Pickleball or Tennis, your agility and promptness must be at the same level as they would be in both situations.

Pickleball courts are smaller than Tennis courts, and there isn’t much running around the court. As a result, your muscles won’t work as hard as they would if you were playing Tennis.

However, it does not imply that you should not be in good physical condition when playing.

The general technique makes Pickleball challenging to serve and place shots. But there are more rallies and a larger court when playing Tennis.

As we have already established, pickleball courts are smaller, with less rushing back and forth. Therefore, according to this, you are not exerting yourself quite as much as you would if you were playing Tennis.

Does this imply that Pickleball doesn’t require a high degree of physical fitness? Unfortunately, no. But Pickleball can be challenging when considering the general technique required, as well as shot placement and serving, especially if you are playing a singles game.

Some tennis strokes are similar to pickleball strokes. However, rather than power-hitting, it’s more about ball placement.

In contrast to Tennis, where you must find the ideal balance of power and control, Pickleball almost always relies on your placement to complete the feat.

Tennis players that play Pickleball will like it for developing their game. You’ll have total control over where your shots land, giving you the advantage you need to keep winning.

On the other hand, the most well-known pickleball shot is the drop shot because it looks good and can raise your score. Therefore, playing Pickleball, especially if you play singles, will significantly enhance your tennis drop shots.

Pickleball requires more accurate and precise shots because the court is smaller. On the other hand, if you prefer angled shots in Tennis, you’ll adore Pickleball because it’s more difficult to execute them in that game.

If you’re used to hitting tennis lob shots from the baseline Tennis, hitting lob shots in Pickleball is also enjoyable. However, because the pickleball court is small and a mistimed lob can cost you points far more frequently than in Tennis, you must be accurate and strategic.

Last but not least, low shots are yet another example. This is because low shots present another significant challenge. Tennis balls bounce higher than pickleball balls, which makes it simpler to position oneself beneath the ball and complete a shot.

The Complexity of the Game 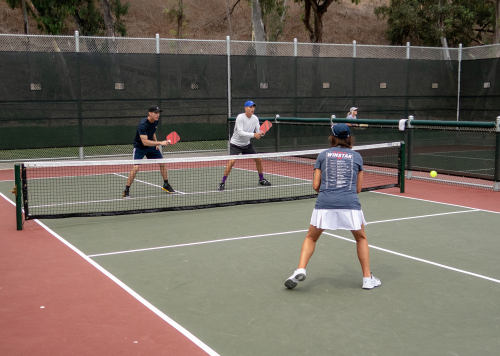 Pickleball is a fantastic method to exercise and move your forearms. It is a game that can be played with simply a sense of balance and coordination and no extra gear or equipment.

Overall, it appears to be a much simpler game than Tennis, but its tendency to be decided by miscues more often may be its most taxing aspect.

When playing Pickleball, you also have to be concerned about the no volley zone, which means you have to ensure you are not in that restricted zone when making a volley. Sure, when playing Tennis, you must try and prevent double faults.

Tennis is a game with many intricate nuances that you can become skilled at exploiting when playing other players. On the other hand, even though Pickleball is a pretty simple game, there isn’t much space for improvement and becoming significantly better than the typical player.

Pickleball is the combination of three sports. But, undoubtedly simpler to learn and master than Tennis, yet I don’t have anything against professional pickleball players who have spent countless hours perfecting their skills.

Injury Rate of Both Games

This is possibly the feature that can distinguish between the simplest two. Pickleball is not quite as intensive or physically demanding as Tennis; thus, playing it reduces your risk of injury practically by default. On the other hand, most games are played at the same tempo and require less mobility.

Tennis players need to run in almost every way they can, take chances, and extend their reach to try and hit shots, so it’s simple to notice which is easier between the two sports.

Does this imply that one is easier than the other? Only if you are specifically seeking a sport similar to Tennis in terms of its structure and concepts but less intensive and physically taxing than Tennis. As with whatever sport you are passionate about, it is up to you as a person.

Is Pickleball Louder than Tennis? 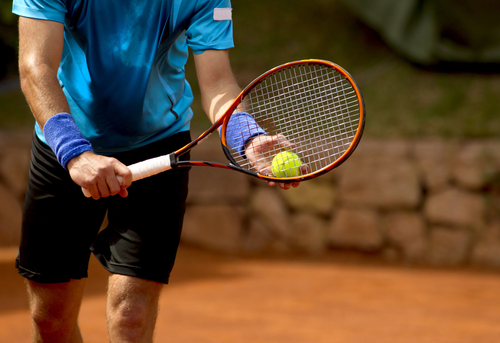 Aside from the easy goings of Pickleball, the noise seems to be gaining traction. The Pickleball paddle and ball are the primary noise sources, aside from the sporadic screams and giggles from the players.

There is no denying the noise level of Pickleball.

According to studies, the sound of a pickleball paddle striking one of the hard plastic wiffleball-like balls used in the game can be as loud as 25 dB louder than the sound of even the hardest swinging Wilson hitting a felt-covered tennis ball.

Sometimes there might be a lot of back-and-forth yelling amongst players because of the small courts and how close everyone is to one another. It can increase the noise level and make it challenging for others around to focus.

So when compared to the soft tennis ball, we can agree that Pickleball is louder than Tennis.

In conclusion, Pickleball is easier than Tennis in some ways and more challenging in others. The game’s complexity, the power hitting and shots, and the other features of Pickleball and Tennis all play a role in how easy or hard the game is.

Also, the movement Intensity and general body activity contribute to the difficulty level of the two sports. But, on the other hand, Pickleball is louder than Tennis due to the hard ball and paddles coupled with the screams from players.

On that note, to answer the question: is Pickleball easier than Tennis? One may have to view it from individual perspectives based on what they generally want to achieve in the sport.

Here are answers to some regularly asked questions as regards pickleball.

Is Pickleball More Fun than Tennis?

Compared to Tennis, Pickleball offers a far more comprehensive range of shots and angles. Compared to tennis rallies, Pickleball dinking and volleying is significantly longer, more erratic in speed, and more entertaining. Pickleball generates a lot more laughing in social situations. The games are over in a flash.

Is Pickleball Difficult to Play?

The sport incorporates aspects of badminton, ping-pong, and Tennis. The game’s rules are straightforward, and it’s simple for new players to pick up, but for seasoned players, it can quickly turn into a brisk, competitive, fast-paced game.

Pickleball players must cross the court to serve, just like in Tennis. The point of call must be below the hip, but you must serve underhand.

Do You Need to Be an Athlete to Play Pickleball?

All ages can play Pickleball, and you don’t need to be athletic to enjoy yourself. Everyone can play Tennis. However, ping pong calls for a higher degree of skill from the start. It has always been seen as an adult game, but that is beginning to change.