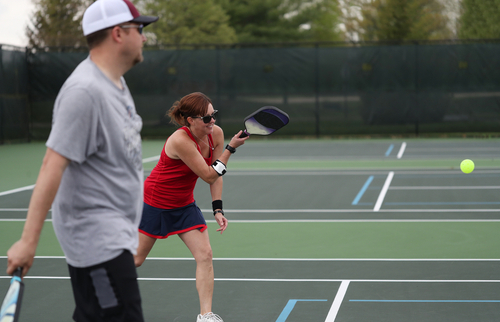 Pickleball is a fun game that’s very easy to learn and play, and it can be played in singles or doubles. It’s a great sport for all ages and levels of skill, and it has had a growing following globally. However, there are many interesting things about this game, one of which is that it is a hybrid sport. This means that it is the result of combining elements from two or more different sports.

So, what sports make up Pickleball? Further, how did it develop, and why is it so popular? Read on as we explore these questions.

What Sports Make Up Pickleball 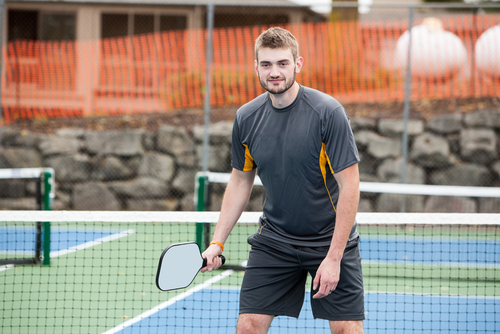 Many new games these days are hybrids, such as Hakoball and Footvolley. However, some stand out for being even more hybrid than others, as they’re made of more than two sports. Pickleball is one of these.

The game combines three sports: tennis, ping pong (or table tennis), and badminton. And the elements of these sports can be seen clearly in the game. Although, it also has its distinctive features as well.

The game has obvious elements from all three source sports: it’s played on a badminton-size court, with a net just about the height of a tennis net and what is best described as an enlarged ping pong paddle. One could even argue Pickleball derives from a fourth game—the ball used in the game is essentially a Wiffle ball.

However, Pickleball also shares other features with these three games. It has similar rules and playings styles to Tennis and Badminton, and it shares the singles-or-doubles option with all three sports.

The most important distinctive feature is the Non-volley zone, also known as the Kitchen. It’s an area 7 feet long and 40 feet wide. Every Pickleball court has two of these, each spanning the width of the court and extending 7 feet away from the net on each side. It is demarcated from the rest of the court by a line called the non-volley zone line.

Players are not to hit the ball into the non-volley zone or let it touch the line during service. However, the ball can hit that area at any other time during the rally.

How Did the Game Come About?

The origin of the badminton, tennis, and ping pong (and even Wiffle ball) elements can be seen in how the game was derived. Pickleball traces back to two fathers, Joel Pritchard and Bill Bel, who were looking to alleviate the boredom of their loved ones during a summer vacation in 1965.

According to the story, Pritchard’s property on Bainbridge Island in Washington contained an old Badminton court they could use. However, Pritchard and Bel couldn’t find enough rackets for a full game of Badminton, and neither could they find a ball. So, Pritchard decided to improvise by bringing in some spare ping pong paddles and a Wiffle ball. That was how the game of Pickleball was born from bits and pieces of badminton, Wiffle ball, and ping pong lying around.

Over time, this makeshift game began to be refined, gradually acquiring its own set of house rules. The tennis element came in when the 60-inch Badminton net was reduced to a more tennis-height one at 36 inches. This was due to how easily the ball bounced.

Why Was It Called Pickleball?

There are two prevailing stories about how the game came to be called Pickleball, both of which guest Roger Bel-Air explained in a rather curious podcast called The Pickler.

According to the first version, for a while after it was invented, the creators and others who knew about the game referred to it as just that: “the game.” This continued until one evening at Pritchard’s house, when the cocktails were in full flow. Someone suggested that it was high time the game got an actual name, and the ideas began to flow. Some ideas that floated around included “rally ball” and “tennis pong.”

However, someone soon pointed out that Pritchard had a dog who would always grab the ball and run off with it (this is probably the origin of the rule about “lets” due to pet interference). The little tyke’s name was Pickle, and so, one plus one equals Pickleball. After all, it was technically Pickle’s ball, was it not?

The second story comes to us from Pritchard’s ex-wife, Joan. About 32 years after the game had been invented, she told the media that she had come up with the name of the game, being inspired by a Pickle boat. And what’s that, you might ask? Well, a pickle boat is one you build with parts from different other boats. As for the dog, Joan says that it came along later on.

In any case, those are the two Pickleball origin stories wafting about right now. The second is obviously not as interesting as the first, which is why people tend to prefer the latter. But which do you think is likely the true one? We’ll leave that up to you to decide.

Popularity of the Game 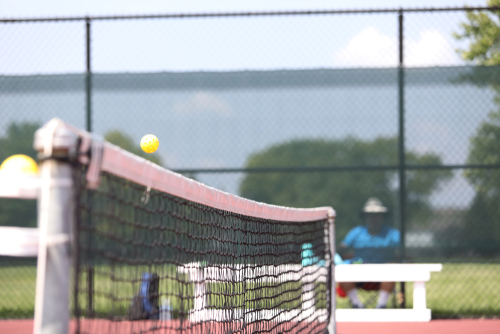 Pickleball ball has grown in popularity since it was invented. However, over the last 8 years, it has witnessed its biggest explosion in popularity yet. . According to the USA Pickleball factsheet, the US saw an average annual Pickleball popularity growth rate of 11.5% for 5 years up to 2021. This included 14.8% (4.8 million players) growth between 2020 and 2021, following closely behind a 21.3% growth the previous year.

Some experts think that the COVID-19 outbreak may have contributed to the sharp rise in pickleball players over the past few years as people looked for safe outdoor activities. Pickleball is a fantastic alternative because it can be played outside while maintaining social distance. This is perhaps why the sport has also become popular among the elderly. In general, however, men make up 60% of the game’s players, while women make up 40%.

Why Is Pickleball So Popular?

There are many factors that have contributed to the popularity of Pickleball as a game. Here are a few of them.

1. It’s Easy for Beginners to Learn

Pickleball is a simple game with simple rules that are easy to learn, and it can be played in a very short time. And once you have mastered the rules, there’s little else standing between you and a fun game. This is ideal for individuals who lead hectic lives and want to exercise quickly without spending much time on the court. Even people who aren’t particularly athletic can participate in at least a dink rally with two relative beginners. Games like Tennis are not as easy to master.

2. Club Owners Are Willing to Switch to Pickleball

The courts for many other games you find in sports clubs are quite large, so they take up more space. However, a pickleball court is pretty small by comparison. And given the fact that you can get four Pickleball courts for the price and space of one Tennis court, tennis club owners are more likely to switch to Pickleball. Furthermore, since people of all ages and genders can play on the same court, there is no need to have too many. Clubs looking to increase their revenue will benefit greatly from this flexibility.

Interestingly, this contributes further to the game’s growing popularity and makes other clubs more willing to switch to the game.

While there are many Pickleball paddle gripping techniques to choose from, there are no significant risks to using the most basic ones for however long you wish. You can use the continental grip for all your games if you want. After all, it’s helpful for most shots. As you advance in levels, you could add diversity to your grips for improved shot execution, but you won’t need to do that for a while.

4. The Speed of the Ball Is Less Intimidating

One of the issues people tend to have with other games is the intimidating speed of the ball. Tennis balls may travel at rates of up to 100 mph. In Pickleball, the speed is more manageable due to the nature of the ball. Most of the time, you’ll reach your maximum speed at half that pace. This means all players can react faster to the ball, making Pickleball easier to play.

5. The Ball Is a Lot Less Bouncy

In addition to a more manageable speed, Pickleball has a less bouncy ball. Because the ball doesn’t bounce as high as it does in tennis, the contacts are milder and easier to handle.

You can really make a terrific swing at the ball, but it won’t travel very far since it doesn’t bounce as high. In a game of tennis, a swing of similar power would send the ball well past the barrier and into the parking lot, and we can all agree that chasing down errant balls is a pain in the posterior. 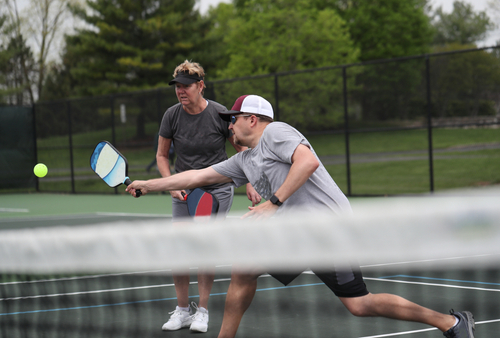 As far as hybrid games go, Pickleball definitely numbers among the most interestingly-derived ones. Its origin is a matter of convenience and the need to make do with what’s available, and the result is a game that’s easy to learn and fun to play.

The Pickleball paddle is basically a large Ping Pong racket.

How old is the game of Pickleball?

Are there elements of any other game in Pickleball?

Strictly speaking, it shares an element or two with many other court games. However, aside from Ping Pong, Tennis, and Badminton, the only other game it shares anything significant with is Wiffle Ball.