Soccer is only straightforward in terms of the fundamental game play and the rules, despite the fact that it may appear to be a reasonably simple sport. The game’s strategy can be fairly complicated, especially at competitive levels like the professional and World Cup.

Playing defense isn’t just another role on the team: it’s an art form!

In this guide, we’ll teach you the correct soccer defense strategy and the important details of how to defend in soccer. Starting with the basics, we’ll discuss positioning, passing channels, and marking tactics, and also show you some more specific skills like tackling and jockeying. At the end, we’ll look at some drills to help you (and your team) become better defenders.

The Basics Of Defending

In this section, we’ll discuss what defending is all about.

The three key defensive positions on a soccer team are:

There’s also a less common role called the sweeper. They play much like a center-back, but aren’t supposed to man-mark opposition strikers. Instead, they sit behind the defensive line and clear any through balls that the goalkeeper can’t get. Due to the offside rule, most professional teams use a flat back line without a sweeper these days.

The mechanisms of a smart soccer defense strategy 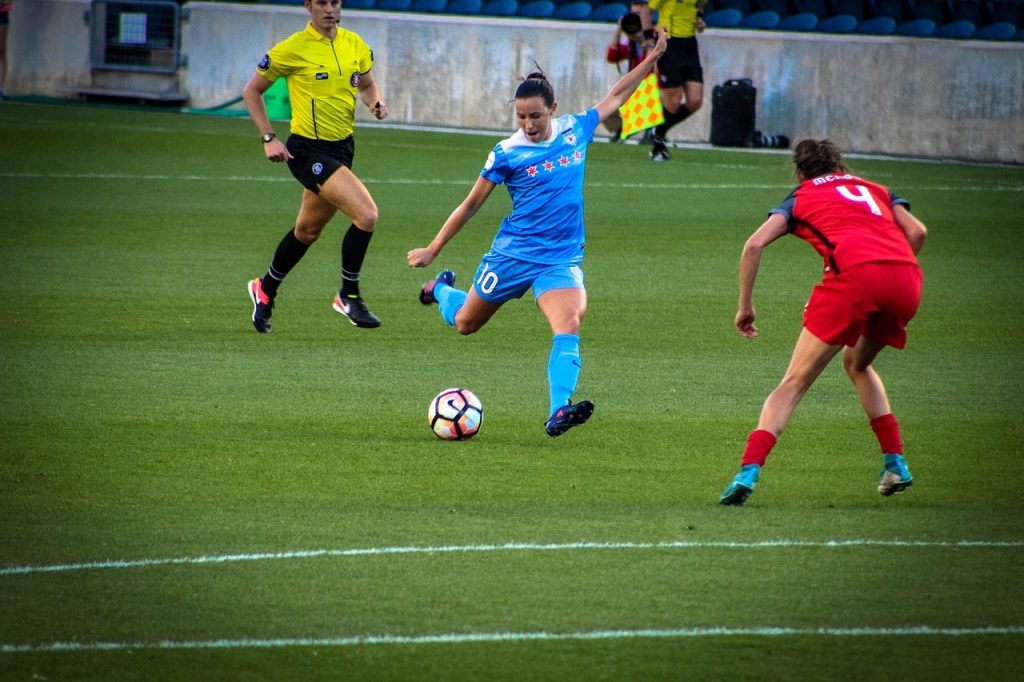 As a defender, the following are some things you and your teammates can do to reduce the number of goals your team concedes. If you’re a new player, there are some key terms in here you should know about.

The key principle of defense

In the modern game, the defenders’ job isn’t just to tackle opponents and block shots. A good defender will prevent the opposition from getting into a scoring position in the first place, reducing the likelihood that they’ll even get a shot on goal.

Even as an amateur player, you should try to reduce the number of shots on target you concede each match. To do this, your back line will need to be well-organized and communicate effectively. Some strategies for proactive defending are outlined in the next section.

In this part, we’ll show you the tactics teams use to keep clean sheets – preventing goals by stopping the opposition from getting anywhere near their penalty box.

As we discussed earlier, a good defense can lower the number of shots on goal they concede per game through effective jockeying. The defender should encourage the dribbler to go out wide, and then try to tackle them when they make a mistake or block their cross.

However, this strategy should be used in conjunction with effect zonal marking or man-marking. This way, when an opponent receives the ball, they have absolutely no space to turn around and play a forward pass. Instead, they have a defender hounding them for the ball.

It’s critical that the jockeying defender doesn’t go in for a tackle they can’t win. If they’re beaten by the attacker, another player in the defense has to leave their man and go to the player with the ball. Now outnumbered, the back line will struggle to effectively mark opposition players.

Another skill that world class defenders have is the ability to block passing lanes. This means having the vision to be able to see where the opposition players will look to pass the ball, and being able to block this line of sight. If done successfully, the other team will have to resort to aerial through balls which are hard to play accurately.

The issue with this strategy is it can be hard to do when using strict man-marking. If the other team is smart, they will draw the center-backs away from the passing lanes with their attackers to free up space for the midfielders to run into.

For this reason, professional teams are unlikely to use this method of defense. They will instead mark players zonally, meaning each defender is responsible for a piece of space rather than a player.

Here’s a basic example. The left-back (the blue player at the top of the diagram) is man-marking the attacking team’s right winger (in red). However, this allows his midfielder (who has the ball) to make a through ball, because the passing lane is left open.

However, in this example, the left-back has chosen a smarter position to better block the crucial passing lane. The pass to the winger is still open, but the through ball isn’t. This is relatively safe for the defending team – if the winger gets the ball, the left-back can close him down and try to force him wide.

What’s the best way to prevent the opposition scoring?

Keep the ball in their half of the field!

Modern defenses also play a role in initiating their team’s attacks. A tackle is twice as useful for your team if you can keep the ball and pass it to a midfielder instead of conceding a throw-in or a corner.

For defensive players, this means having the ability to look up and spot a teammate who’s in space when you have the ball. It also means getting used to the movement required to pass the ball around the back four (plus the goalkeeper) without giving away possession in the final third. 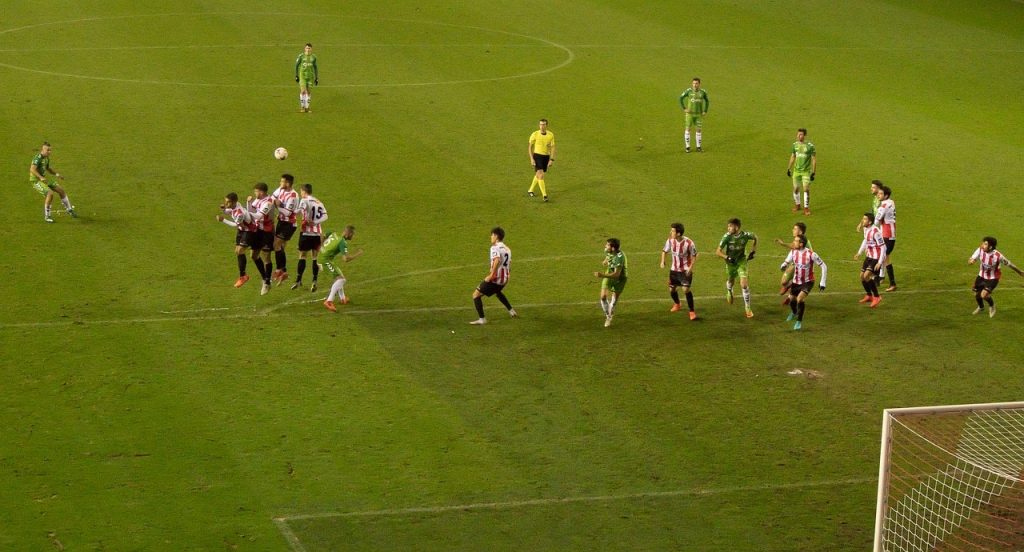 So far we’ve looked at how an effective defense works. In this section, we’ll discuss some drills to put these techniques into practice.

Make a small, narrow field with two small goals at each end. Have the defender begin with the ball at one end – they start by passing the ball up to the attacker at the other goal who then runs at them. When the ball goes out or a goal is scored, get the next two players in.

This drill is useful in teaching defenders how to jockey and pick the right moment to tackle the dribbler. You’ll also learn how to keep side-on to your man, an arm’s length away from the player. 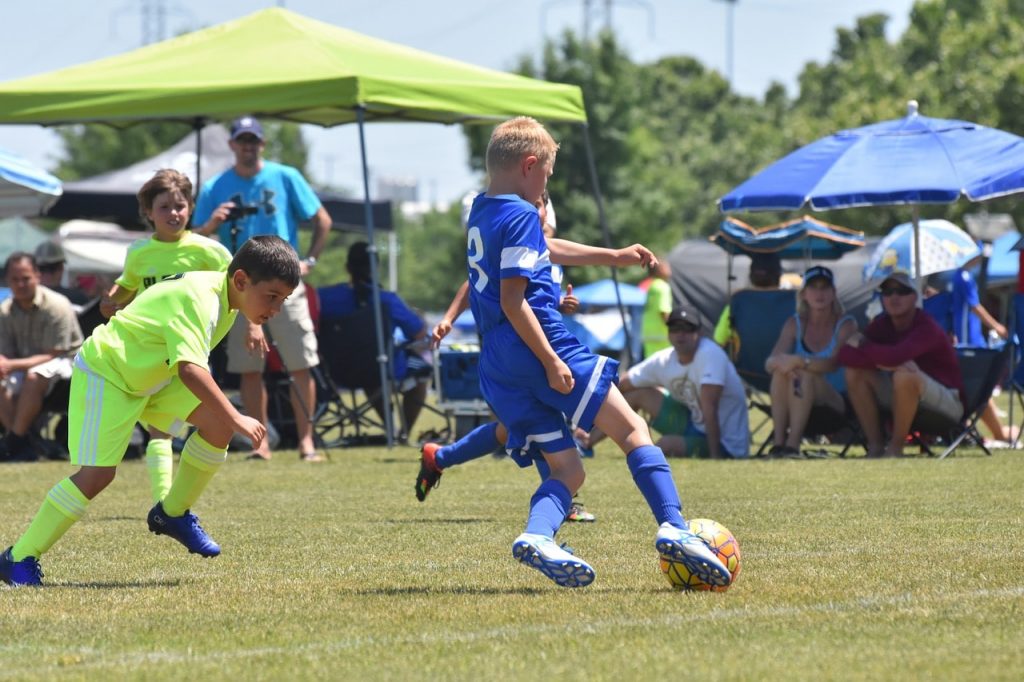 This is just like the last drill, but with larger, uneven teams (3v2, 4v3, 5v4 etc) and a bigger play area. Each time the ball goes out, start it with the larger team so that the defenders are constantly working on their defending.

In a real game, your back line is going to be outnumbered if they get counter-attacked, so it’s worth practicing these situations. Instead of just man-marking, have the defenders form a line and shift across, following the direction of play. When they get the ball, have them try and play it out from the back towards the other team’s goal.

You can even go for 4v2 or 6v3 games, but this might be a bit too easy for your attackers. This isn’t just a drill for the defense: your front line can work on their quick counter-attacks too. Just be sure that you’re strict with the offsides.

For this drill, have three teams of 2, 3 or 4 players. Make a field divided into three rectangles, and have each team in one area.

Give one of the teams in the two outer areas the ball (the blue team in this example). Their job is to make five passes between themselves. Once this is done, they must pass the ball to the team in the other outer area (the green team) to score a point.

To make this a bit harder, one player from the middle team can enter the team in possession’s area and try to take the ball from them. The two remaining players in the middle can try and intercept the pass to the other side.

In this diagram, if the red team is successful in intercepting/tackling the ball, they can swap places with the blue team. It’s then the green team with the ball and the blue team in the middle (one of the blue players in the green area) for the next round.

Some teams really struggle when dealing with crosses and corners.

To practice this, create a 4v4, 5v5 or 6v6 situation in the box, preferably with a goalkeeper and a full-size goal. You can either:

Make sure your strikers are running in from the edge of the box rather than just standing still – this makes it much harder for the defense to mark players and stop headers. Also, encourage your goalie to punch or catch balls that are too close to him.

Bonus: Transition from defending to attacking

Soccer has evolved so much in the last decades that it’s now normal for defenders to join in or even lead the attack. In the modern game, this transition from defending to attacking is sometimes referred to as a counter.

Some of the best defenders today are those that can make tackles and then start attacks by initiating the build-up play or breaking through with a pass or dribble. Let’s go through a few examples:

How to practice transitions from defense to attack

Now you’re ready to go out there and make some tackles!

Seriously though, we hope this guide was helpful. If you have any questions about defending, don’t hesitate to ask in the comments below!

Next, Have a look at our comprehensive review of the Best Soccer Cleats for Defenders currently available.