We love ball machines. They’re never late to practice, do what you tell them, and won’t complain if you smash a winner!

Using a ball machine can be a solution if you are having trouble finding reliable hitting partners or local instruction is too pricey.

As a result, employing a ball machine can be a perfect substitute because it will give you a much more in-tune experience.

In this guide, we’ll show you 7 of the best ball machine drills for improving your tennis strokes. We’ll outline how to do each drill, and explain how it’ll make you a better player.

We’ll look at routines for improving reflexes/speed and some others designed to maximize your stamina/endurance.

Drills to improve your reflexes/speed 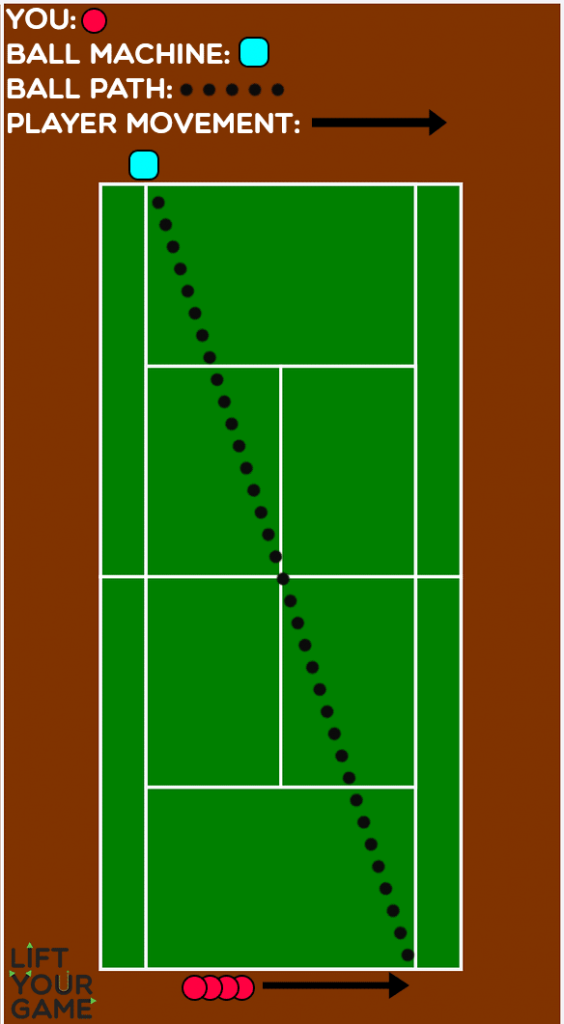 Decide whether you’ll be training your backhand or your forehand. Once you’ve chosen, place your ball machine in the opposite corner of the other side of the court.

Have it fire into your backhand/forehand corner at maximum speed (no oscillation) every 10-15 seconds.

Your job is to see how far away you can stand from where the shot lands and still make the return. Stand completely still on the baseline – only when the ball is fired can you move to it. When you make three returns in a row, move another foot away from the corner.

By playing a game with your ball machine, you can work on timing your approach shots and improve your speed off the mark when sprinting to the net.

Put the ball machine in the middle of one of the baselines, and turn on both horizontal and vertical oscillations. Stand on the opposite baseline.

Any deep shots you should defend, like you’re playing at match pace. If you hit it out, the machine gets a point.

You score points by attacking the machine at the right moment. When it plays a shorter ball inside one of the service boxes, sprint off the baseline and make an approach shot. You must do all of the following to score a point:

Try and see if you can win a set against the machine! For an extra challenge, draw some chalk targets (or use hula hoops) to mark areas in the corners where your approach shot must land. 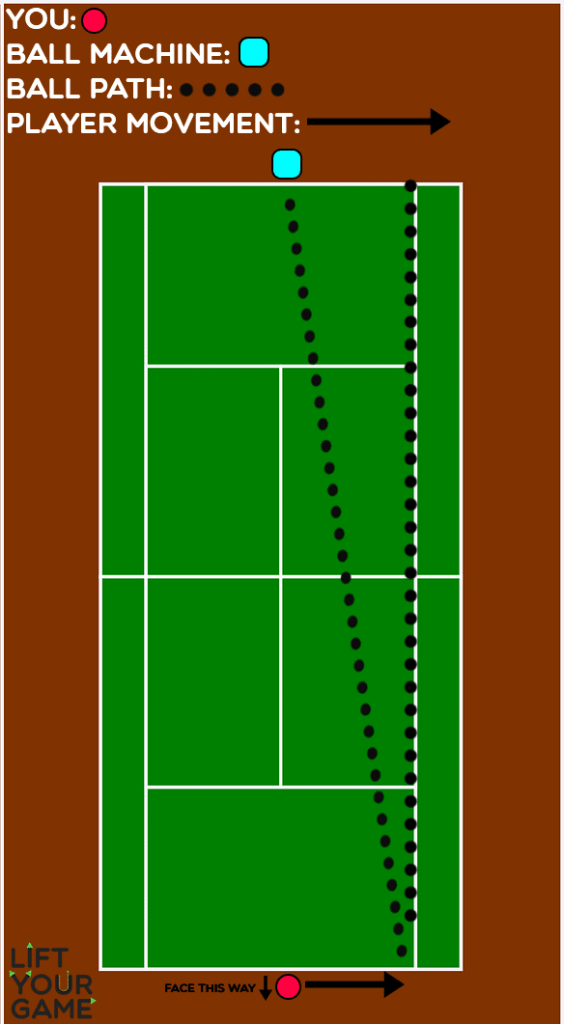 Place the ball machine in the middle of the opposite baseline. Set it to fire randomly into either corner of your half of the court, at medium-high speed. If your machine doesn’t have a random horizontal oscillation setting, just set it to alternate between each side of the court.

Stand in line with the machine, on the center of the other baseline, with your back turned to it.

When you hear it fire, turn around as fast as you can, and race to return the ball. You’re not allowed to move until the ball has been shot at you.

If you can make the return really easily, increase the speed or place your racquet on the floor in front of you, forcing you to pick it up before you shoot. Conversely, if you don’t have enough time to hit the ball back, slow the machine down a bit.

Once you’ve played the shot, move back to the middle of the baseline and face away from the machine again, ready for the next ball.

This drill is awesome because it helps to train your reflexes as well as your speed – you have to spot the ball and move to it very quickly.

Program your machine to fire regular baseline shots, alternating between each corner. Try to return each ball at match pace.

To make this a little more challenging, set up a minefield of around 10-20 obstacles behind the line where you’ll be running. You could use cones, racquets (if you can balance them on the butt of the handle), ball hoppers, or water bottles. Avoid anything you could potentially trip up or twist your ankle on, like tennis balls or racquet bags.

Your job is to make awesome returns while dodging all of these obstacles. If you touch one, that’s game over – see how many balls you can hit before this happens.

Add more objects and move them closer together if the game isn’t challenging enough. 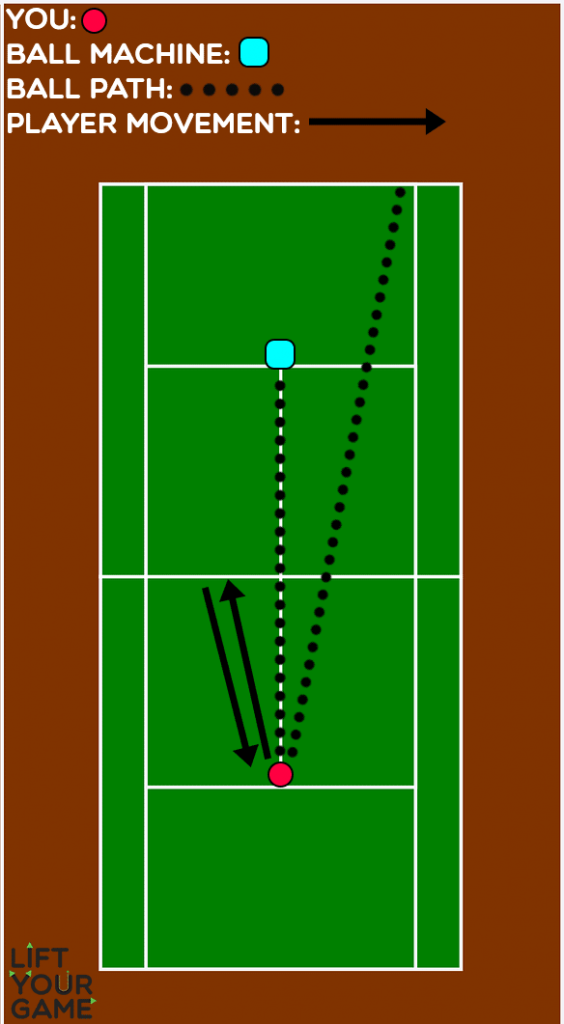 Set the machine to lob the ball down the middle of the court, firing every 6-7 seconds. If it has a random vertical oscillation setting, turn it on.

Your job is to make a powerful return. But here’s the catch: in between every shot, you have to run to the net and touch it. For an extra challenge, jump the net and then jump back in between shots.

We love this drill because it replicates those situations in-game where the opponent lobs you when you’re really close to the net. This routine is also excellent for building stamina. If your machine can hold 50+ balls, it’s really tiring (especially if you jump the net!).

This drill is perfect for practicing forehand/backhand strokes while also working on your endurance.

Have the machine fire topspin shots down one side of the court. Set it to fire only every 20-25 seconds or so.

You’ve got the make the return, and then run a lap of the net before hitting the next shot. Once you’ve hit 15 shots, let 2 balls go by you to give you some time to recover. Yes, this is as exhausting as it sounds. Increase the delay in between shots if you’re struggling.

But in a real match, particularly in the third, fourth and fifth set, you’re going to be absolutely dead. It’s important to practice forehand and backhand shots when you’re utterly exhausted, as you’ll need to be able to play well when tired in competitive games. Fatigue is the number one reason experienced players hit the ball too short. 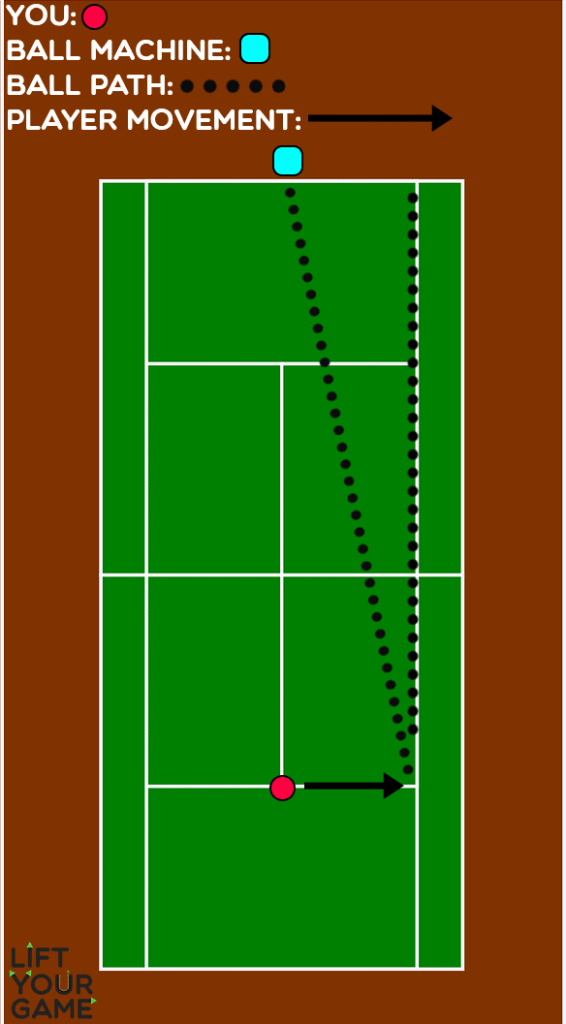 Get your machine to shoot balls anywhere inside your half of the court, and turn random oscillations on. Set it to fire every 5-10 seconds.

Your job is to make the return. However, you’re only allowed to run on the lines marked on the court, like in the video game Pac-Man.

Not only will you be improving your stamina, you’ll also be forced to play lots of really awkward shots, like you would in a real game against a tough opponent.

Try and see how many consecutive returns you can make. If you step off the lines or don’t make the shot, that’s game over!

Got any other drills we should add to this list? Drop us a comment, we’d love to hear about them!