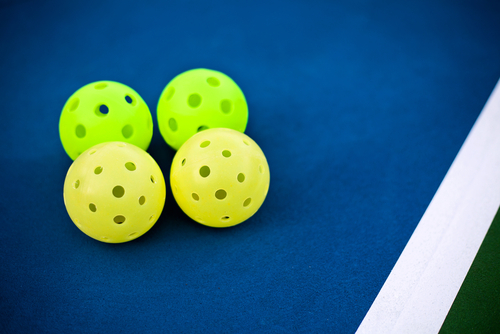 Pickleball is a unique combination of three of the hottest court games in town: Badminton, Tennis, and Ping Pong. It’s easy for anyone of any age or gender to learn and play, whether in a national tournament or a church parking lot. However, you must have to get the equipment, and this includes the ball. The game also has its own special ball, which is different from that of Badminton, Tennis, and Ping Pong, what kind of ball is used in Pickleball, and what is it made of? Read on to find out.

The Type of Ball Used

The type of ball used in Pickleball goes back to when Joel Pritchard invented the game in the summer of 1965. At the time, Pritchard could find neither paddle nor ball for a game of Badminton, so he improvised by using a Ping Pong paddle and a Wiffle ball that was lying around. After over 50 years, little has changed as the ball used is essentially a Wiffle ball.

What’s A Pickleball Made Of? 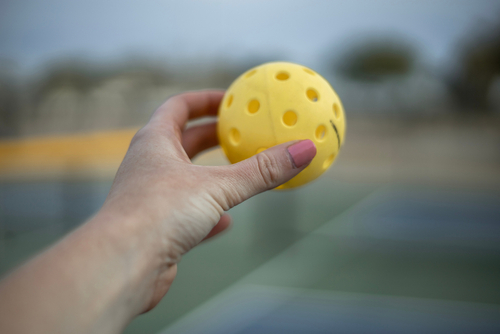 While essentially a Wiffle ball, a Pickleball is quite distinct in its makeup. When producing Pickleballs, manufactures use significantly lighter plastic material than in a standard Wiffle ball, but with greater durability and more holes. However, the exact details of a given Pickleball depend on whether it’s for indoor or outdoor play.

Pickleballs in History and Contemporary Times

For the first 50 years of the game’s existence, players made use of a Cosom ball for playing both indoors and outdoors. Cosom was a brand that made plastic balls at the time, and their balls had bigger holes drilled into them. Unfortunately, this made them very slow, and their performance in the wind was not that great—not even indoors, where the wind was no problem.

However, the ball has undergone many changes over the past 11 years. For starters, no one plays with a Cosom ball anymore (otherwise, it would be a rather frustrating game). There are also new equipment regulations for the game, thanks to the International Federation of Pickleball and USA Pickleball development. These regulations cover everything about the game, including specification for balls to be used. Rather than standard Wiffle balls, the game now uses very specialized ones unique to it.

In line with these regulations, the balls are made of light plastic material, typically injected into a mold, which hardens as it cools. Then, the producer begins to drill the familiar pattern of holes into them. 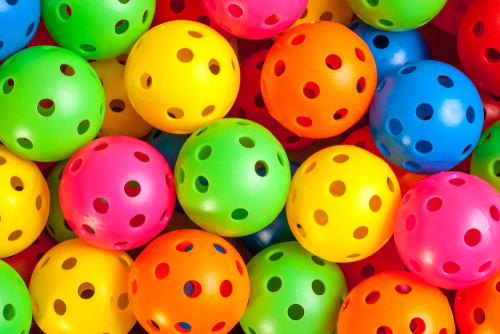 There are two main types of pickleball used in the game, depending on where you are playing: indoor and outdoor balls. Each type’s properties reflect the environment in which it will function. In any case, let’s look at these two types, their differences, and what each one is made of.

As the name implies, indoor Pickleballs are for indoor courts. One of the most relevant differences between indoor and outdoor courts in this game is the texture of the surface. Indoor courts are usually softer, smoother, and easier on the ball. A good example would be a wooden gym floor, which would be a lot less destructive to the ball than, say, a concrete one. But let’s get back to the ball.

Everything about an indoor Pickleball is engineered to maximize its playing properties on indoor courts. For instance, a defining feature of an indoor pickleball that’s hard to miss is the relative durability of its plastic. These balls are made with lighter and softer plastic to complement the smoother surface you get indoors. The fact that they won’t have to deal with much wind resistance allows them to be slightly larger than outdoor ones, in addition to having fewer holes.

Indoor Pickleballs are generally easier to control during a serve as they are less bouncy and weigh less. But while some folks might enjoy the relative weight, many seasoned pickleball players view the resulting lack of force as a drawback. However, while it’s conceivable that the properties of indoor Pickleballs can be improved on in the future, they still perform well enough at the moment. What is more? Though the lifespan of a Pickleball may vary, it’s more likely to get too soft over time than to develop cracks. Of course, getting soft means you have to change it, but you can still use it for quite a bit before it becomes unusable.

Finally, you can still use indoor Pickleballs to play outdoors, even though it’s not advised. If you do use it outdoors, bear in mind that because of its reduced weight, it is more susceptible to wind damage. It’s not designed for use on concrete or asphalt, therefore it will also wear out considerably more quickly.

Believe it or not, outdoor Pickleballs are intended exclusively for outdoor play. The texture of outdoor surfaces is markedly different from indoor ones, as the former tend to be rougher. As such, the properties of an outdoor Pickleball have to be fine-tuned, so to speak, to suit the outdoor environment. They have to be able to withstand considerably more wear and tear than you get from indoor surfaces.

For starters, outdoor Pickleballs are made up of slightly heavier and more durable plastic, enabling them to last longer and withstand the elements. They generally weigh 0.9 ounces, which is just 0.1 ounces more than indoor Pickleballs. However, that small difference in weight makes a whole world of difference.

For instance, the heavier ball enables players to hit with much greater force, intensifying the action and speeding up the game. Additionally, because of their added weight and intended use outdoors, the wind won’t have a significant effect.

Finally, due to  the noise they make and their rather poor performance on softer surfaces like playing Pickleball on grass, outdoor pickleballs are used on indoor courts less frequently. And because of their exposure to the hard and uneven surfaces outside, they also tend to shatter more frequently than indoor balls.

There are quite a few complaints people have about the regular Pickleballs used, and noise is perhaps the biggest one. Noise remains a continuous problem, especially on Pickleball courts in parks, clubhouses, or residential areas. In fact, due to the loud thwack that the plastic ball makes when it strikes the wooden or plastic paddle, park districts and residential areas frequently hesitate to construct pickleball courts.

In areas where there are already Pickleball courts, people sometimes get sued for the noise pollution. The reason for this much-hated noise is the structure of the ball itself. The holes make it produce more noise than you get when hitting a more solid ball.

One of the leading Pickleball paddle manufacturers in the world, Gamma Sports, has found a solution to the noise issue. The Pennsylvania-based company has developed a foam-based quiet pickleball that is fresh and improved. And though it’s been appealing to many people, this new ball has not been approved for professional Pickleball tournaments yet.

However, you can still use it for domestic or non-professional playing. Although, if you will go down this route, you must bear in mind that the foam ball won’t play as well as the traditional plastic or wooden one. This is because it is lighter than regular pickleballs. 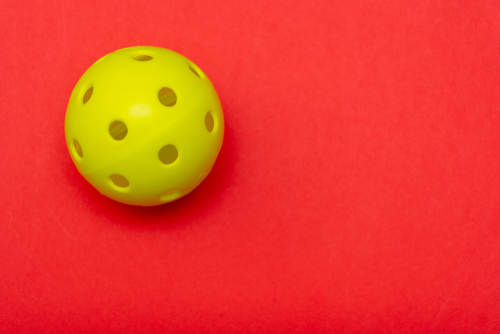 USA Pickleball is one of the main bodies responsible for setting Pickleball standards for tournaments in the US. It keeps list of 61 specified balls of different styles, hues, and producers that are approved for use in tournaments.

There is also the International Federation of Pickleball, with its guidelines. To comply with these, balls used for the game should be only one color. The Color itself, however, can vary with that of the court or with the manufacturer’s preference. Apart from this, the only other prerequisite is that the balls must be of uniform sizes and weights.

As far as paddle games go, Pickleball is one of the most fun to play. It is a unique, quick-paced sport that is fast going viral  in the US. And although it requires little in the way of equipment, each one must be optimal to give you the best playing experiences. The is more true for the ball than any other equipment in the game. So, if you want to enjoy the game of Pickleball, go for the right pickleballs.

Which Pickleball manufacturers should I try?

Wilson Sporting Goods and ONIX are great manufacturers you can test out.

What are the best balls for Pickleball?

The TRU 32 ball by Wilson Sporting Goods and the ONIX DURA Fast 40 are two of the best ones in the market.

Can you use outdoor Pickleballs for indoor play and vice versa?

In theory, you can. In fact, you may be able to cross-use to some manageable degree. But the quality of play will be damped.