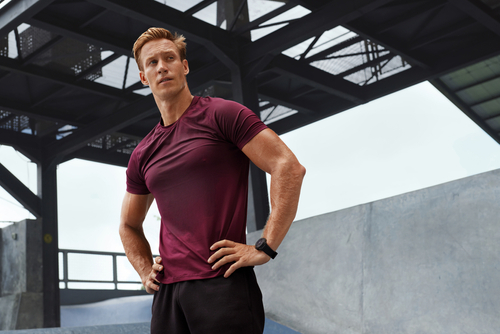 Male soccer players wear athletic vests that resemble sports bras but carry GPS trackers. They are called GPS sports bras, and they allow coaches and players to monitor various performance metrics such as distance covered, heart rate, top speed, and more. These vests are designed to fit tightly on the player’s chest so they can carry on with games and practice unencumbered.

Modern GPS tracking vests hold several components that help them track dozens of metrics on a match or when having more advanced training sessions with soccer rebounders. The live data they generate is priceless. There’s a reason why top players like Virgil van Dijk, Zlatan Ibrahimovic, and Adama Traore use them. We’ll reveal that later in this article.

For now, here’s a brief rundown of everything we’ll cover:

What are GPS Sports Bras and Why Do Players Wear Them? 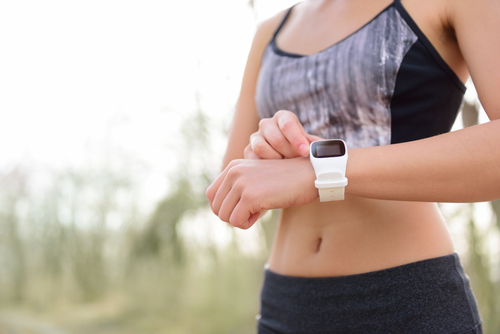 A GPS sports bra or vest is an equipment that holds a tiny GPS tracking device along with other performance monitoring devices such as heart-rate receivers and accelerometers. The player wears the bra during a match or training session, and coaches track their performance and body reaction data in real-time.

You’ll find a lot of these sports bras on players that play for top European clubs. These clubs need to collect as much data as they can to get the best out of their men. Individual players also use the vest to monitor how their body reacts to certain situations, especially when recovering from injury.

These bras are similar in function to GPS tracking watches. However, players, coaches, and physios now prefer the bra. We’ll reveal the reason behind this preference in a later part of this article.

How the GPS Vest Works

The vest consists of several key components held in a rechargeable pod the size of a matchbox. The most common components are the GPS monitor, magnetometer, and microchip, which controls some of the logic.

The main body is made of light and flexible synthetic rubber material such as neoprene. The GPS tracking device runs at about 10Hz frequency and can capture 1250+ data points in a second. It then transfers the live GPS tracking data to a computer or mobile device via a wireless connection. The computer or phone should already have an app installed for interpreting, displaying, and analyzing the received data.

What the coaches or physios decide to do with the information they get will determine how much the player and their team can benefit from the technology.

Why Do They Resemble Bras?

Although these are sports vests, they look a lot like bras, which can be confusing. Why don’t players stick to smart watches or belts that perform the same functions?

There are two good reasons for this.

Those are the two key reasons the device has to be worn like a sports bra.

What Data Do They Track? 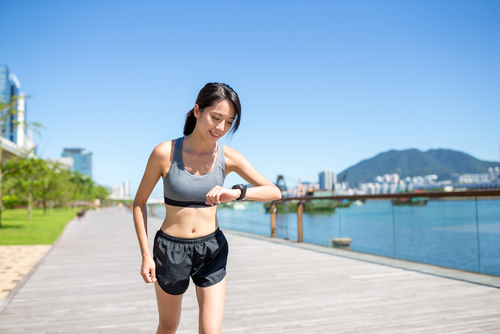 GPS sports vests vary depending on brands and product versions. The data each product tracks also varies. In general, the GPS tech in these vests can collect and analyze the following data:

How much distance soccer players cover in a game plays a significant role in their overall performance ratings. Teams like Liverpool and Manchester City do a lot of running, which has greatly contributed to their success in recent years.

Coaches can’t keep an eye on every player throughout the match. However, with the GPS tracker in the vests, they can compare live data to determine which players are not covering enough distance.

These sports bra monitors can also track how much energy and power you exert during a game, practice, or rehab session.

It can determine if you exerted too much energy to accomplish a task, such as running a mile, or if you didn’t.

This technology has great applications in the rehab process. Physios want to have a handle on how hard players train while recovering from a recent injury. The insights from the vest will keep them from overworking the player.

The heat map is one of the most useful statistical data in soccer. It tells us how an athlete played in a game by drawing a map of what parts of the field they covered.

For instance, if you’re a left wing back, the heat map may reveal that you spent most of the game playing along the left wing with emphasis on the attacking or defensive third, depending on your playstyle.

Coaches can use this info to advise players on where they should be at different points in the game. A winger may be instructed to drift more towards the center area if it turns out that they spend too much time hugging the flanks.

How many times the heart beats per minute (BPM) is one of the most important metrics for determining player fitness. Also, monitoring variations in heart rate will reveal when a player tends to exert themselves more.

Physios can watch out for abnormal heart rates that may be indicators of impending cardiac failure. Normal resting heart rates are different for athletes as their bodies have better conditioning, but the medics can tell when something isn’t right. That way, they can avert disaster.

Speed is one of soccer’s most valuable attributes. It aids both attack and defense, so naturally, players keep training to get faster. You can even see players shave their legs before the game for extra speed and agility. Working with a stopwatch to track your improvement takes too much time and concentration. The “male sports bra” provides a better solution.

The GPS technology in these sports vests can measure top speed, so you know how fast you need to go to get better. They can also measure average speed so the team can set the right expectations for you, and not give you roles that waste your potential or require someone faster.

Being a fast player makes you dangerous, but having that burst of pace that takes you from jogging to hitting your top speed in a few seconds makes you nearly unplayable. That’s why players use smart vests to track their acceleration while they work to improve it.

Speed is a lot easier to track than acceleration, but thanks to the GPS sports vest’s inbuilt accelerometer and fast data points capture, players can accurately determine the rate at which their speed changes (acceleration and deceleration).

Some of these sports bra devices can also reveal how many calories you burn during an exercise session. This feature is especially useful for athletes who are trying to get in shape after a long break or vacation.

By creating set targets, the wearer has to keep pushing until they reach these targets. That way, one can easily predict how long it would take to get the desired physiological results.

These gadgets can even monitor the player’s movements for intensity and load distribution around the body. The real smart ones can tell if you’re subconsciously placing more strain on one leg, which could be a sign of an underlying injury.

Any abnormalities or sudden data spikes should alert the coaches and physios. They will use their expertise to make sense of the info and take appropriate action.

When Do Players Wear Them? 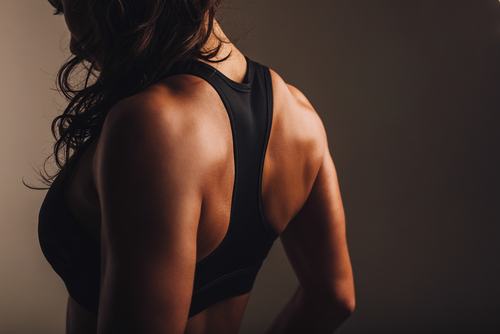 All serious soccer players have to take practice seriously, whether it’s individual sessions or group training. The data from the sports bra helps players and their teams in training.

When footballers wear these vests to train, the manager and other coaches can compare their performance with historical data to see if the players are training hard enough. This monitoring device will also alert them of potential injury risks.

Pro players are often seen wearing the vests as they run around the training ground. Unlike in games, where they have to hide them in their shirts, the vests are quite obvious during practice.

Coming back from an injury can be a frustrating experience for any player. Most professionals will require constant monitoring and rehab from the physio. To help with the recovery process, male soccer players wear sports bras.

The data from the device will help physios make a more informed decision on what the next step towards a full recovery should be for the player.

If you’re familiar with player transfers in soccer, you just have heard of potential new recruits undergoing medicals before finalizing their contracts.

These medicals could determine whether or not the club carries on with the deal to sign the player. The aim is to assess areas such as heart condition, injury risk, sprint speed, and muscular vulnerability.

It is not uncommon for players to strap on a GPS sports vest and run a few laps on a treadmill while the medical team observes their performance data.

Not many people watch players during training, rehab, or medicals. However, all soccer fans watch live games or replays. Players wearing these “sports bras” in games was what brought the equipment to the public eye, and it’s probably the reason you’re on this page.

During a soccer game, the managers and coaches may have their players wear the footballer GPS sports bra. It allows them to track their overall performance and make more informed decisions while the action is ongoing.

Many MLS teams use the data from vests only after the game. That way, they can better analyze player performance and prepare for their next game.

Since players can’t wear any apparel that covers a large part of their jerseys, they have to wear it under their shirts. Hence, you may not notice the vests. However, there’s the occasional “bad boy” who celebrates a goal by pulling off his shirt and getting the inevitable yellow card for it.

Another way to know a player wore a sports bra during a game is to wait until the final whistle. They tend to take off their shirts, mostly to exchange for other footballers’ shirts.

Benefits of the GPS Sports Vest 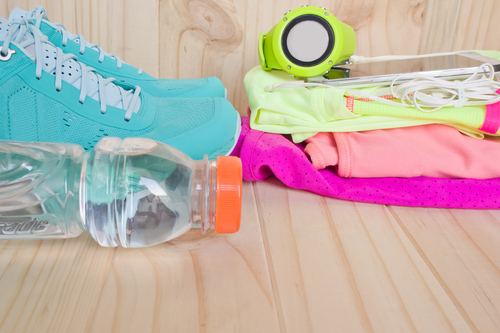 There are other kinds of sports gear with GPS tracking features. However, below are the benefits that set the vest apart from other modern devices.

Can Amateur Players Use the GPS Sports Bra?

Yes, amateur and youth players can definitely benefit from having these smart sports vests. They can use the reports from the apps to know what part of their game needs improvement. Even without a coach or trainer, you will benefit from these insights.

Many of these vests have the stats of thousands of professional soccer players, such as top speed, distance covered, and energy consumed. They also keep a record of your personal best, so you know the gap you need to bridge if you hope to become a pro someday.

If you’re bothered about the cost, there are versions that are ideal for amateur and youth soccer players. These products are a lot more affordable and easier to use. We talked about one of them in our recent post about the best soccer gifts. Check it out if you’re thinking of getting one for yourself, a friend, or a loved one.

So, it’s settled: male soccer players wear GPS sports vests that resemble sports bras. They use this gear to hold the device that tracks their performance metrics during games and training.

The GPS tracking vest is a game-changer and has revolutionized soccer at professional, amateur, and youth levels. With the World Cup on the way, be ready to spot more of your favorite players wearing “sports bras”.