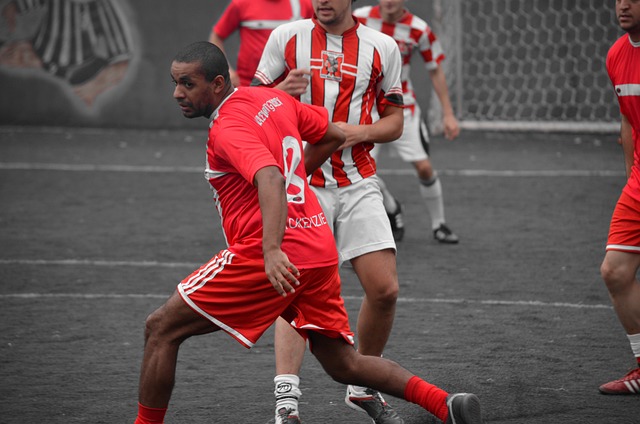 You’re probably here because one day, you were watching a soccer match and noticed something odd. This strange observation left you with a nagging question: why do soccer players shave their legs?

Well, you may be surprised to discover that the answer has less to do with aesthetics than with functionality.

In this article, we’ll reveal all of the reasons behind the shaved legs you see on footballers. We’ll also talk about the methods they use to achieve such smooth legs.

Let’s dive in, shall we?

Perhaps the most common reason for soccer players to shave their legs is to make taping easier for them.

If you don’t know what taping is, here’s a brief summary:

Athletic taping involves the application of tape across the wrist or ankle to protect bones, joints, and ligaments by reducing pain and helping with injury recovery. The tape is applied either directly on the skin or over a pre-wrap.

Not many players have the time to use the pre-wrap before every game or training session. Also, taping them directly to the skin provides added support that low-cut soccer cleats may not offer when the player makes sharp turns during a game. Hence, some soccer players prefer to apply the tape on their legs without pre-wrap. If the legs are hairy, removing this tape can be quite painful.

Not many people notice this, but bandages play a huge role in the life of modern footballers and even when simply practicing with a soccer trainer. They use it when injured and even when they’re not. It provides support, protects the skin, and helps injured limbs recover faster.

But what happens when you put a bandage on hairy legs, leave it for a few weeks, and then attempt to remove it? As you can imagine, that would be a painful experience for that player.

That is why some players maintain hairless legs. If they get injured, they may not have the chance to shave before the bandages come on. To avoid the pain of pulling them out later on, these players shave off all the hair on their legs.

Athletes, including soccer stars like Lionel Messi, love to get a deep tissue massage as part of their recovery. This is a treatment that comes with several benefits, such as:

The list goes on, but the gist of it is that these massages improve player performance, especially when applied to their most valuable tools: the legs.

Getting a deep tissue massage with hair and legs causes discomfort for both the player and the masseuse. To avoid such awkwardness, the best thing is to keep their legs shaved while they continue to enjoy the benefits that come with the treatment.

During a match, the intense nature of the game causes players to sweat profusely. That is the body’s natural reaction to heat or hyperactivity.

As the match carries on, this sweat may get trapped under the hairs on the legs. It could result in more heat, itching, or irritation, thereby affecting performance.

In soccer, players are seeking every advantage they can get. If getting rid of some leg hair will help them feel more comfortable on the pitch, then there’s a good chance they’ll shave regularly.

This will allow the sweat to flow and even evaporate without obstruction, thereby reducing the temperature around that area.

Although many consider the idea a myth, there are athletes who believe that body hair affects their aero-dynamism. This is why you’ll find cyclists and swimmers shaving their bodies before an event. They believe this reduces the drag or resistance they experience from the air or water when they move.

We already talked about how players are constantly seeking an edge over their opponents. It’s not crazy to think that they shave their legs and other body parts for that reason.

Whether it works or not, there’s no doubt that if they believe it does, their confidence could translate into better performances on the pitch.

Socks are part of any professional or amateur player’s kit. So are shin guards. With the constant threat of ankle injuries, these guards can be the difference between being available for the next game and spending the next few weeks with the physio team.

Depending on your sensitivity, you can feel itchy or irritated when you put on socks or shin guards. You don’t want to go into a big game feeling that way.

Since players need these items to play, they would have no problem getting rid of leg hair if it causes them discomfort.

Part of being a soccer player involves sliding on the grass or turf. It could be in the form of a tackle or block. Sometimes where the soccer player drama begins. It could also be a part of your goal celebration.

Fans love to see stars slide past the corner flag to celebrate a goal as much as they love seeing defenders make crucial slide tackles. What they don’t know is that hairy skin could lead to turf burn, which can be a painful experience for the player.

How does this work? The hair on the leg increases the friction between the skin and the grass, causing a burning sensation that leaves an angry mark in serious cases.

The majority of injuries that players suffer happen on the leg. When this happens, the medical team has to treat the player with whatever method makes sense at the time (including surgery). It becomes difficult for them to do their job if the injured area is covered in too much hair.

To allow them to get to the wound, they may need to shave off the hair completely. This can be considered a waste of valuable time. To make life easier for everyone involved, some players see the need to shave their legs before games. That way, the medics apply treatment quickly to any injury they may suffer.

For certain players, being good at soccer is only part of what it entails to be a superstar. They also have their looks going for them.

They earn not only by playing but by looking good on social media for their followers and the brands that sponsor them.

Some footballers have strong, muscular legs that look great hairless. Their fans have also grown used to it and may be put off if their idols appear on the pitch with hairy legs.

Cristiano Ronaldo is one of the most attractive footballers on the planet. He, too, appears to shave or wax his legs, and they look fantastic.

Tattoos are common among soccer players of all ages. Some have them all over their body, including the legs.

One has to assume that the major reason people get tattoos is to display their beauty and symbolism. But with large outgrowths of hair in the way, this becomes a problem.

That is why soccer players who have leg tattoos remove the hair on them.

How Do Soccer Players Remove Hair from Their Legs?

Next, we’ll look at the various methods these players use to get rid of their leg hairs. Of course, shaving is not the only method available to them. Some use methods that are a lot more effective, but we’ll discuss all of them.

Shaving legs with a razor is perhaps the most basic grooming method of the modern man. It’s fast, easy, and inexpensive. Naturally, you can assume many players shave to get rid of their leg hair.

However, the razor shave comes with some risks. These include:

That’s why you should always shave with quality shaving foams.

Using tweezers to pluck out each strand of hair on the leg is also another option. The method keeps hair from regrowing too quickly. However, it’s also the slowest manual method.

Having to pluck hair strands from their roots can also be agonizing. Not many people can withstand the pain, even if they’re hardened athletes.

This method has become popular among both male and female soccer players. It involves covering the hairy area with a layer of heated wax. Eventually, the hair follicles dilate and can be removed from their roots without no resistance.

This method is both effective and efficient. It also causes the hair to take longer to regrow. Unfortunately, many people complain of skin irritation after the procedure. Poor hygiene during the application process could also cause some infections.

There’s also the possibility of ingrown hairs, but you can avoid this with proper exfoliation before the procedure.

One of the major issues with leg hair removal is the speed of regrowth. Thankfully, science has given us the Vaniqa cream. It’s prescription-only, and you can combine it with other methods to maintain results for longer.

We can’t say for certain that players use Vaniqa, but since this is a viable addition, one can assume that some do.

In this procedure, you’ll need to expose your legs to lasers that eliminate the melanin found in human hair. It is a permanent hair removal procedure that costs a lot of money and requires a certified dermatologist.

The entire process could last up to two months, with the player coming in for 4 to 7 sessions. Patients do experience some pain during the procedure, although it’s manageable. The fact that it’s permanent and super-effective makes the pain worth it.

Threading is quite similar to plucking. The difference is that you use threads and not tweezers. Also, threading allows you to pull out multiple strands of hair at a go.

It’s just as effective as many of the other methods. However, it can be painful and time-consuming.

The use of electrolysis to remove hair follicles has been existing for decades. It involves pushing tiny needles against each follicle and literally “shocking” them out of commission using electric currents.

The removal is permanent. However, it’s an elaborate procedure that costs a lot of money.

One relatively unknown hair removal method is the use of keratin-based depilatory cream. The cream destroys the bonds that hold the hair, causing them to fall off easily.

The procedure works fine for most people. However, the cream has an unpleasant smell. There’s also the possibility of irritation if you leave it on for too long.

Players can create a mixture of sugar, warm water, and lemon juice to help with hair removal. There are specialists who handle the process, but it’s DIY-friendly.

You may experience some pain, but the method is quite effective because it reduces the regrowth rate.

Why do athletes have shaved legs?

Athletes shave their legs to prevent chaffing when they run. Chaffing is a common problem among athletes and can be painful. Too much body hair increases the frequency.

Do you have to shave your legs for soccer?

Soccer players are not obligated to shave their legs. However, it makes life easier for them because they can pull tapes and bandages from their legs without experiencing pain.

Why do footballers shave their bodies?

Players shave their bodies for the following reasons:

Gone are the days when hairless legs and wearing sports bras were seen as strictly feminine. Soccer players shaving their legs has become the norm, and male athletes see no problem with the practice. To these men, the benefits they get from shaving are far more important than keeping with any social stereotypes that may exist.