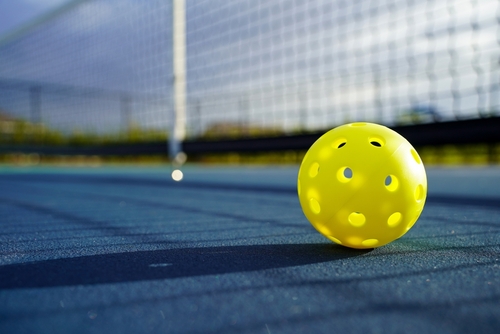 The origins of pickleball and how it earned its name are shrouded in mystery and mythology. It was invented about 60 years ago, in the summer of 1965, and how it became known as pickleball is a passionately discussed issue among academics all over the world.

Overall, there are two main origin stories behind how pickleball got its name. The first includes a tale about the inventor’s dog, while the other refers to a pickle boat found commonly in the sport of rowing. Which you choose to believe is totally up to you.

Continue reading to learn more about pickleball, including its origin, as well as why pickleball is called pickleball, and more.

Pickleball is a popular paddle sport that combines all three elements of tennis, badminton, and ping-pong. This sport is played with a paddle and a plastic ball with holes. This game is also considered appropriate for players of all ages and skill levels.

Fortunately, Pickleball has simple rules, making it an excellent pastime for beginners. As participants acquire experience, the game can also get increasingly tough, competitive, and fast-paced.

Considering the rules of pickleball are so similar to those of ping-pong, anyone can learn to play. This sport is also an excellent option for elderly tennis players who have physical restrictions such as hip, shoulder, knee, or other joint issues that make Pickleball easier than tennis.

Pickleball has gained popularity over the years as an excellent kind of workout for both the mind and the body. After all, this sport allows you to improve your balance, agility, reflexes, and hand-eye coordination without placing undue strain on your body.

Overall, Pickleball provides something for everyone, whether you’re a beginner trying to learn a new sport for fun or an experienced player looking for the adrenaline rush of more competitive play.

How Did Pickleball Begin? 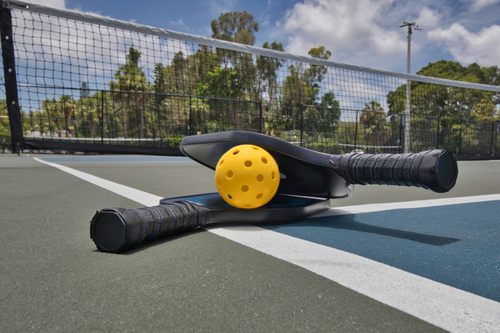 After a golf outing, two fathers named Joel Pritchard and Bill Bell arrived at Pritchard’s house on Bainbridge Island, Washington, in 1965. They discovered that their families were bored and had no way to pass the time. To ease the ennui of his loved ones and close friends, Pritchard, therefore, devised a strategy to eliminate the group’s summertime problems.

Pritchard’s home had an old badminton court, so they hoped to play their game there. Since he could not find tennis rackets, he improvised by using extra ping pong paddles and a whiffle ball. With these odds and ends laying around, a brand-new game was created. Today, this game is currently more commonly known as pickleball.

Two years later, in 1967, Joel Pritchard built the first permanent pickleball court in the backyard of Pritchard’s neighbour and close family friend, Bob O’Brian. The choice to construct a dedicated and permanent court solidified their improvised game’s status as a popular activity.

As the game gained popularity in the Pacific Northwest, Pickleball, Inc. was created in 1972 to help interested players join a league and purchase playing equipment. This comprised paddles, netting, and balls designed solely for pickleball and not stolen from other racquet games.

Not only did the establishment of this organization assist individuals in locating appropriate pickleball equipment, but it also aided in the development of the game from a local pleasure to a genuine sport.

Why is it Called Pickleball? 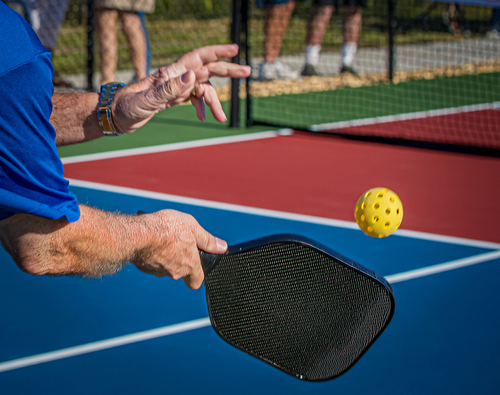 With two origin stories, it can be hard to determine the real reason why Pickleball was named so. As a result, we’ve included both tales so you can make up your mind yourself.

Pickles the dog is crucial to the earliest origin tale of pickleball. In this tale, one of the game creators, Joel Pritchard, owned a dog named Pickles. Pickles, according to legend, would pursue errant pickleballs into the bushes and take off after them.

For many years, the game went without a formal name, after all, the game’s creators had no clue it would survive past the first summer. But since pickles kept engaging in this amusing chasing behaviour, Pritchard and his family referred to the game as “Pickle’s Game.”

Once it became obvious that the game required a name as it became a staple of summer holidays, finally, in honour of the cherished family dog, the inventors and their families chose the official name “Pickleball.”

When people inquire about the origin of the game’s name, this is the tale that is most frequently told in both interviews and memories. This is also the tale that blogs and articles like to convey, according to an online search. After all, who doesn’t adore the idea of a cuddly pup wreaking havoc and mayhem as it runs around chasing balls?

In the sport of rowing, a crew of rowers assembled at random to compete in races is known as a “pickle boat”. These rowers were frequently the extras who no one wanted on their team, and they frequently finished last.

As a competitive rower and Joel Pritchard’s wife, Joan said the sport was like a “pickle boat” since it was practised by people who were “leftover” from other sports. One can understand how the name fits given that they invented the sport as a hybrid of ping-pong, badminton, and tennis.

Additionally, according to Peggy Pritchard, the Pritchard’s’ daughter, pickleball couldn’t have been named “after the dog since we didn’t receive the dog until years after the game started.” However, in a recent interview, designer Barney McCallum stated, “Everyone involved knows the name originates from the dog.”

Overall, the second version is a more complicated story to convey.

Which Pickleball Origin Story is True? 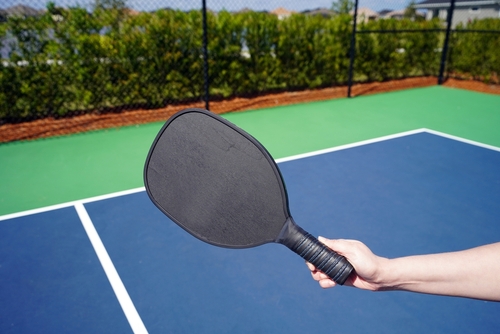 Overall, the true origin of the name “Pickleball” will depend on who you ask. Given that Pickles was their dog, and this story is told in the media more often, it is most likely that the sport is named after the Pritchard’s family dog. However, take note, that there is also a plausible explanation as to why many find the boat tale to be the most plausible and rational.

In all honesty, it’s possible that any one or both of them is accurate. Maybe that adds to the sport’s appeal. Overall, even if the evidence suggests that it came from Pickles the dog rather than Pickles the boat, it is simple to understand why the dog story is more frequently reported.

Whatever tale you accept, we can all agree that pickleball is a ridiculous name for a sport. But millions of people now enjoy this ridiculously titled sport, and we can thank the McCullum’s and Pritchard’s (and maybe their dog) for that. 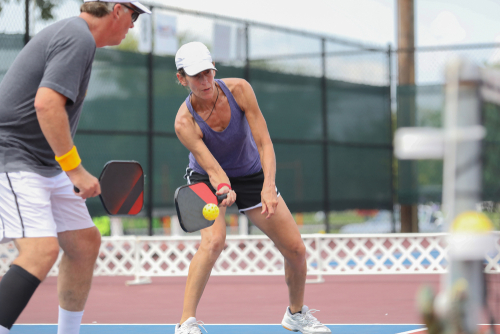 Three guys in the Seattle, Washington, area created pickleball for the first time in 1965. Joel Pritchard and Bill Bell sought to find a method to keep their kids entertained while on a family trip, which is how the game was created. The pickleball paddle was later developed and created by the third inventor, Barney McCallum, who later managed a business that marketed pickleball accessories.

Is Pickleball Considered an Olympic Sport?

Take note, however, that things could change in the future. For example, though a change in status for the 2024 Paris Olympics is a little ambitious, things could still change for the 2028 Los Angeles Olympic Games.

How Many People Can Play Pickleball?

Pickleball is commonly played one-on-one (also known as singles) or two-on-two, depending on the number of participants (doubles).

While pickleball is mostly played in pairs, individual competitions are also staged often. Overall, the difficult dilemma of what to do when there are three of you who want to play.

Fortunately, an odd pair doesn’t mean you can’t play. After all, having three players is commonly referred to as “American singles” in the sport of tennis, and although not a competitive or professional style of the game, it is still a recognized way to play. Fortunately, you may also employ the three-player variation rule when playing pickleball.

How Do You Score Points in Pickleball?

In general, one should be aware that pickleball’s standard scoring system is 11 points. However, in competitions, it may also rise to 15 points on occasion.

A point can only be scored when your team is serving, and when it happens, you trade places with your partner.

Take note that you also need to beat your opponent by a margin of two points in order to win the game.

What’s The Difference Between a Whiffle Ball and Pickleball Ball?

When comparing the two balls for the sports, one can also see a variety of differences. For example, in order to make contact with a paddle, a pickleball ball concentrates on the bounce. They are heavier because they have more surface area and 26–40 fewer holes.

On the other hand, the Wiffleball ball emphasizes curved throws and is lighter due to its smaller surface area, 18–26 total holes, and bigger holes.

Is A Pickleball Court Different From a Tennis Court?

Pickleball, for example, is played on a considerably smaller court than tennis, which is 60 feet wide and 120 feet long. Pickleball courts, on the other hand, are 20 feet broad and 44 feet long, almost the same dimensions as badminton courts.

Take note, that interestingly enough, for size comparison, you can actually put four pickleball courts on a typical tennis court!

Pickleball’s origins and how it got its name are steeped both in mystery and folklore. Created over 60 years ago, in the summer of 1965, how Pickleball got its name is a commonly hotly debated topic among scholars worldwide.

Overall, there are two primary genesis tales for the term pickleball. The first involves a story about the inventor’s dog, while the second relates to a pickle boat, which is often used in rowing. Which you choose to believe is entirely up to you.

The most popular anecdote involves one of the game’s inventors, Joel Pritchard, who had a dog named Pickles. Pickles, as tradition would have it, would take off and chase stray pickleballs into the bushes for hours while the Pritchard’s played.

On the other hand, Joan Pritchard, Joel Pritchard’s wife, presents the second origin tale narrative, claiming that the name was officially derived from Pritchard’s “pickle boat.”

Overall, who you ask will determine the genuine source of the term “Pickleball.” Given that Pickles was their dog, and that this narrative has been reported more frequently in the media, it is most likely that the sport is named after the Pritchard family dog. Take note, however, that there is also a logical explanation as to why many people regard the boat story as the most credible.

In all honesty, either one or both of the legends be correct. Perhaps this adds to the sport’s allure. Overall, even if the evidence points to Pickles the dog rather than Pickles the boat, it’s easy to see why the dog narrative is more widely circulated.

Whatever story you believe, we can all agree that pickleball is an absurd name for a sport. But, thanks to the McCullum’s and Pritchard’s, millions of people today continue to enjoy this absurdly named sport.